Thorns of Grief – Anthems to My Remains 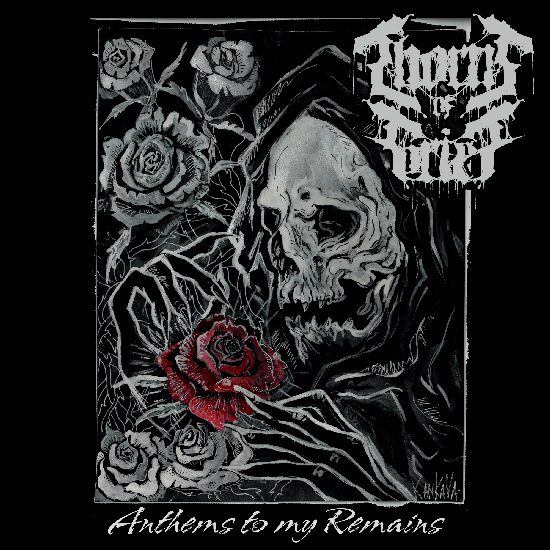 First of all, this record carries so many different expressions and emotions that I actually had to write it all down while listening, word by word: dark, haunting, pain, anxiety, aggression, infirmity, frustration, despair and, of course, as the project name itself says – grief. Nebiros, the author, avoided the assumed risk of Funeral Doom being dull, which we as listeners are aware of from the beginning of the record. Instead, you experience all the magic of the subgenre by diving more and more into the music as if you were travelling to a different state of reality.

“Anthems to My Remains” starts off with haunting and eerie tunes of a self-titled song, put there to introduce the whole project. It consists of four longer tracks and a short one that is basically 2.5 minutes of growingly anxious repetition – it’s playing with your mind. While not technically difficult, the work of each instrument is totally integrated to this musical entity. Especially the piano, which is clean, dark, and borderly innocent-sounding. Production-wise, a bit flat maybe. And I really liked the gradation of the vocals – they go from pain trough aggression to powerlessness, sounding very honest. They contrast their emotional expression with the instrumentals whose expression is more atmospherical, giving us a healthy duality. Overall, this is both an interesting listen and an experience! (Lana)