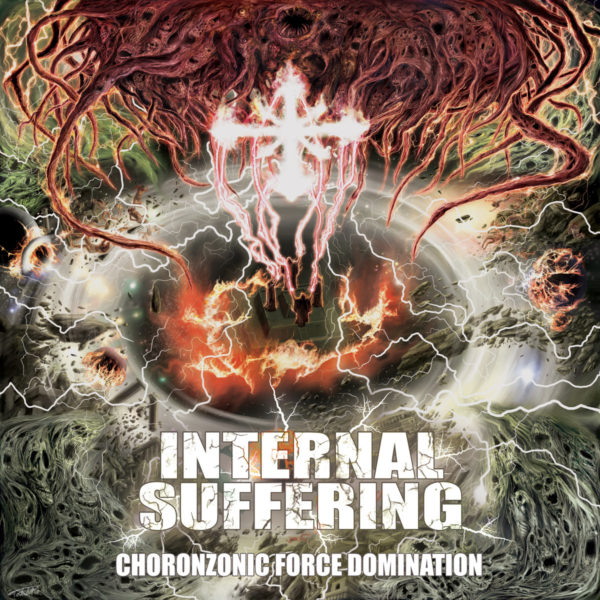 Formed way back in 1996, Internal Suffering are stalwarts of the Brutal Death Metal scene. “Choronzonic Force Domination” is their third of five full length albums mixed in with demos, splits, etc. The Colombian quartet, now located in Spain, are masters of technical brutality, and show that mastery herein. To top it all of, the re-release (original release was in late 2004 of Displeased Records) was produced by the mighty Eric Rutan of Hate Eternal infamy and features four additional track. Enough details. On to the important business of how it sounds.

Choronzon is a temporary manifestation of chaos in bodily form, according to Crowley. As I understand it, for those prepared, a summoning and subsequent meeting with Choronzon can free the seeker to find some unknown need. I don’t think I’d want to meet such a force unprepared. I’m unclear as to whether the album title refers to domination of or by Choronzon, but I’d guess the latter. The album itself certainly meets the qualifications of this entity. Chaos abounds, though it is quite dense through layers of riffs nailed into place with unrelenting percussion. The vocal growl wend their way through these musical forces of destruction with aggressive intensity. For those unprepared for the dissonant reality of this exceptional monstrosity, the awakening will be sharp and painful. For those prepared, you may just learn something about yourself between the notes.

“Choronzonic Force Domination” may be my favorite release by this project, though I struggle to decide. It is a remarkably consistent example of brutal death metal done right. The sharp dissonant riffing, the near martial percussion, the bludgeoning bass lines, and the evil rasp of the vocalist unite is a wall of abject chaos that is hard to breach. With time and patience, you will find your way in. Trust me when I say that the journey will be worth it. (Hayduke X)