Decaying – The Last Days of War 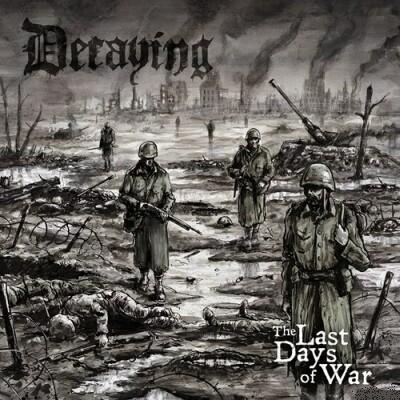 Excuse me; do you have a minute…or two? If so, let me introduce you to the lost twin brother of Martin van Drunen; Matias Nastolin. Throughout the years there have been some vocalists who are able to get close, but Nastolin really nailed it! Impressing! Well, if you have a vocalist like that in your ranks, it would be a stupid thing to play something like Nile, Dying Fetus, Devourment…or something like boring deathcore with many…many…many completely useless and not headbangable breakdowns. Did I mention…many…and completely useless? No, Decaying released their third album within three years filled with Old School Death Metal in the vein of Asphyx, Bolt Thrower and Hail of Bullets. A good mix of mid- and uptempo rhythms, a doomy approach at some occasions, the variation of a low growl and aforementioned Martin van Drunen vokills and haunting leads, this is very well played. The lyrics about World War I and II (Passchendaele, El Alamein) are as clear as plain day-light, or did you expect topics about the libido of penguins? I was already impressed when they released their “New Order” demo back in 2010, but “The Lasy Days of War” is hopefully their breakthrough. They deserve it, but that’s my humble opinion. If the veterans of Asphyx and Hail of Bullets ever think of a small tour together, I know a bunch of young soldiers who are able to infantry scouting work and don’t fuck up the mission before the big guns go to the front. (Ricardo)