Decaying – Beyond a Distant Front [EP] 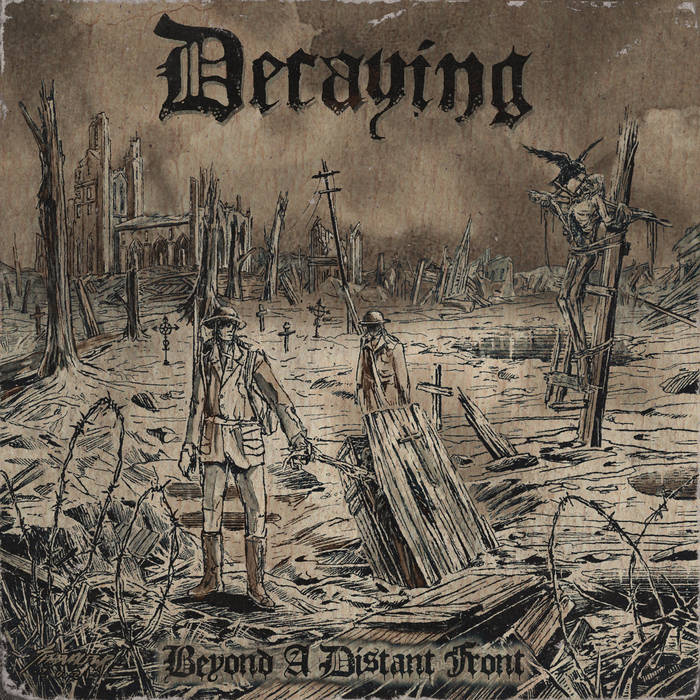 ‘Beyond a Distant Front’ is something of a holding EP; a way for Finnish Death Metal band Decaying to tread water before their next full length release, as well as giving them the chance to unleash some material that might otherwise never seen the light of day. These type of releases are often a great deal of fun, and ‘Beyond a Distant Front’ is no exception to that! Featuring two new tracks (At least they were in 2021, though they were recorded in 2018) and three live offerings, this EP breezes by in the blink of an eye. A word to the artwork by Skaðvaldur. Stunning; a great use of bleak, muted colour and intricately rendered to give scope to the true horror of the First World War.

Opening with the title track, Decaying get straight into the two things they love the most; namely fast paced Death Metal and miring themselves in the history of warfare! This track is focussed on the process leading up to battle, before charging the enemy lines and advancing on their capital city. Musically this is free flowing stuff with huge riffs complimented by bigger and more frenetic drum tones, plus raw angry vocal work and a punishing bass line. To see the song out the band delve into some crushing mid-tempo chugging which is hard to not enjoy.

Whereas the opening track was not specific to a certain battle, ‘The Hell of Verdun’ requires no explanation. Needless to say though that Decaying truly bring out the horror and futility of this time through well thought out lyrics. In keeping with the theme, this track goes through bouts of punishing brutality but then grinds to an abrasive halt; and in doing so produced horrific, harsh guitar melodies that reflect all too well the turgid, impossible Hell of Verdun.

I won’t spoil the surprise of which tracks the band have included in the live portion of that EP. You can find out for yourself. And you should too, because this EP slays!