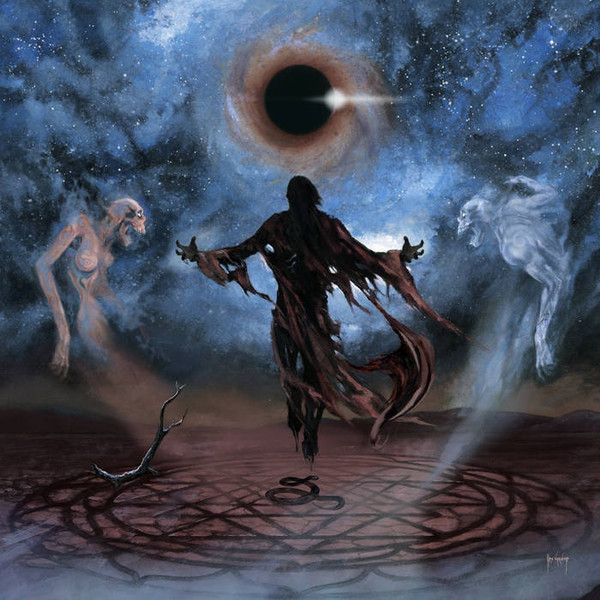 There exists a saying by the philosopher, Heraclitus, wherein no man ever steps in the same river twice, for it’s not the same river and he’s not the same man. In my opinion, I have also found it to be true whereby art and music is concerned, for there are moments where one may gaze upon a sculptor, and eyes may delineate what the spirit may feel in that exact moment, for the art now becomes a vessel, that onto which your emotions are placed into… but like the water that runs along the river, ever changing, ever flowing, the perception that one way glean in that particular instance may too change, for the art and soul will both coalesce, but not into the same shape as before.

This brings me to ‘Djinn’ by Uada, a Black Metal release that draws upon the genre’s transcendental nature to fashion a work of art that appears fluid in its nature, where every listening experience offers a grandiose amount of merits, where its architecture is never static, for its pillars will construct a new abode for one’s conscious to dwell. The beauty that is bestowed upon this release is due to the fact that even though, tonality wise, the sounds which emanate forth exudes an ‘aggressive’ tone, Uada manages to cauterize that which breeds human emotions, in other words, the energy that courses through the veins of ‘Djinn’ dispel an elemental atmosphere rather than originate from a body imprisoned in flesh and plague with despair.

Uada’s musical composition woven into ‘Djinn’ channels forth a ceremonial candor to its language of motions in the way the melodies ebb and flow, for it is like smoke that curls from the lit pyre and dances as it licks the night sky, so too, do these notes ascend and coil. Just like a forest which gives birth to nature’s sound, where the wind that caresses the trees and the blades of leaves along the earthen floor to the running water along the edge, the same sentiment can be shared with the musical components within ‘Djinn’, for it is not trying to paint a façade to conjure up obscure notes, rather it serves as merely a medium to bring forth these energies from a mystical plane. Songs such as the title track, ‘Djinn’ and ‘No Place Here’ serves as a testament to where the strings and percussion magnifies the atmosphere to a dense proportion creating a rather intimate experience in the manner of the tempo, but the highpoint of the album unmasks itself where the slower moments take precedence. Take for instance, the final moments of the title track, ‘Djinn’, the way the guitar is able to fashion a melody that gives the illusion as though it was taken from the breath of a celestial being, what I mean is the aura it generates just from those few notes, it is these nuances which grants animation to this release. The vocals however becomes the very scale for which these elements are balanced upon, for at times it feels as though a cluster of stars is being summoned forth by the tongue of this entity, a howling creature that lurks beyond the void. The manner in which musical facets revolve around the vocal delivery gives the sensation as though the verses uttered forth imbues an ineffable force onto these melodies, transforming them into a different being.

If the essence of a body that is in repose, where the sole of the feel to the crown of the head experiences perfect harmony, if that particular moment can be chronicled in sound, whereby one’s consciousness takes flight upon the night bird’s wings to journey to the vast unknown…I truly believe Uada’s ‘Djinn’ would encompass that which unfolds itself to the mind, to birth a celestial path for the soul to travel, where every time the sounds that resonate will alter its course. It is because of this serene experience witnessed through the vibrations of these sounds, it is why I would recommend this album to anyone, for it is a voyage for the senses to embark upon, a discovery carved from sound. (Justin Joseph)