Ceremonial Castings – Our Journey Through Forever 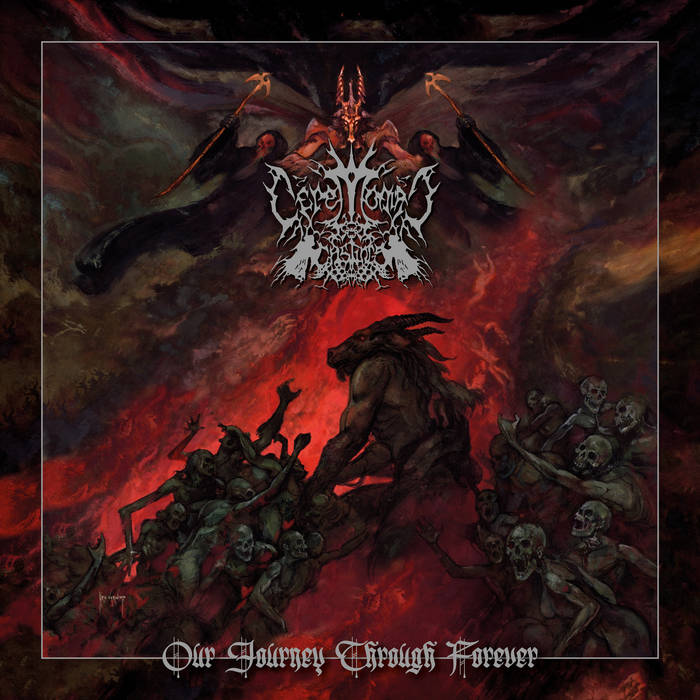 First aspect anyone should know about this review, I am a massive fan of Symphonic Black Metal.  Understandably, the genre has received much harsh criticism, especially 20 years ago. I purchased everything I could as I would watch the European bands of the genre either completely fade into oblivion or drastically changing their sound into completely different genres such as straight up Brutal Death Metal or sometimes outright Techno.   I was all too disappointed seeing bands put forth two or four excellent albums before fading into a dimensional vortex never to be seen again.  Some bands such as Limbonic Art returned after a hiatus with continuous new material that is actually worth hearing.  Hopefully, Ceremonial Castings will have new material, in the future, but nevertheless they have returned from their hiatus. Before the band had split, they were constantly releasing a wealth of material.  Some comilations were released here and there, but for the most part, the band continued to plow forward with creativity until their “Cthulu” album was released in 2014.

Cthulu was definitely an odd era for the band as their longtime drummer, Matthew Mattern was out of the band due to some health issues and was replaced with the ambitious Michael Thompson, who was with the band in what seemed to be their final days.  Since then Thompson has moved on with another band from the Pacific Northwest (Silver Talon).  However, by some absolute miracle, not only have the Superchi brothers reformed, they were somehow rejoined by Matthew Mattern. This is amazing considering the other work Nick and Mattern have been conducting on the side with projects such as Mysticism Black and Abigail Williams.  Jake of course, was more than preoccupied with Uada.  Due to Uada’s unparalleled success, for over six years, Ceremonial Casting seemed doomed to be rotten and forgotten.

Uada will most likely always go on, gathering new fans each and every minute.  Their fan base seemed to grow exponentially for a few years, and I have been amazed that for how hard the Ceremonial Castings trinity poured their hearts, souls, sweat, and blood into everything they did, they never quite blew up like Uada initially did.  Although, Ceremonial Castings had some amazing moments such as opening for Gorgoroth for several days in Costa Rica, their popularity was a small sliver compared to what Uada’s debut album reveled in.  Now, with the band’s return and re-recordings being issued forth like “Salem 1692” towards the end of the year 2020 Sypmohnic Black/Death trio has returned with a compilation featuring 20 songs for over two full hours of great music.

As for their current release, this was not intended for older fans.  If you have all the demos and full length releases, this album is definitely not for you unless you are an enthusiastic collector of the band. These songs are re-recorded and can be heard on their fantastic back catalog.  If that sounds like too much of a Symphonic Black/Death attack for your ears, then this current compilation will suffice to get you mostly caught up on the band’s long running career.  Most of their more well known songs the trio has often played live such as “Come Forth…Damnation,” “Immortal Black Art,” “Midnight Deathcult Phenomena,”  “Into the Black Forest of Witchery,” “Barbaric is the Beast,” “A Serpent’s Kiss,” and of course “Universal Funeral March” are all iconic songs for the band on this release.

As far as the newer songs are concerned, “the Purifier of Battle Parts I” and “II” respectively scattered apart from one another.  These songs are fine and are both instrumentals, but if you are thinking about buying this album for the two new songs…no, you do not necessarily need them.  Buy this if you really want to hear them, but once again, this album is not necessarily for old fans looking for new songs, but for new fans looking for old songs.  On that note, this album does the job as the sound quality does seem severely beefed up as this is not a mere remaster but actually re-recorded songs.  Everything on this release sounds clear as day and loud as merciless thunder. The track listing is really solid, as there is a variety of older songs from their middle era.  There is nothing from their first two full length releases (“13 Roses,” or “Vampira, the Second Coming”) nor is there any material on here from their more recent time before they broke up (“Salem 1692” or “Cthulu”).  Salem was already re-recorded and released in 2020.  This is for newer listeners looking to find their way through their discography and for that, this compilation serves it’s purpose.  Meanwhile, I will foam at the mouth for the next two years while waiting for a new album from the band. (Old Man Stares)