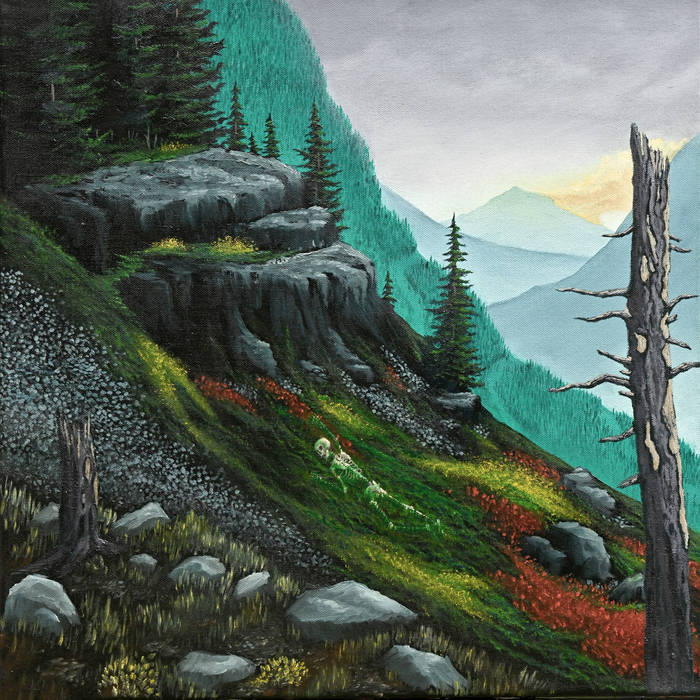 I was drawn to this 2021 release by the colourful and vivid nature of its cover art. ‘A Distant Fire’ is the fourth studio album from Pacific Northwest Atmospheric Black Metal quartet Alda, and has been released on all formats by German Black Metal label Eisenwald. Alda were fairly prolific in their first eight years but since 2015 have been very quiet on the release front, so ‘A Distant Fire’ marks something of a return for the Tacoma, Washington band.

Opening track ‘First Light’ is literally that, a breaking ray of early dawn sunshine created through peaceful sounding acoustic guitar which is then accompanied by subtle cello and violin tones. ‘Stonebreaker’ is where the album gets down to business with wind swept flowing guitar leads, pummelling drum tones with a slightly muffled production for a warmer sound, as well as rasping lead vocals. from the Tolkienesque nature of the bands name, and the lyrical content of this track, an image of the Dwarves in Tolkien’s work springs to mind, carving out their great mountain halls and hording their riches secretly. ‘Stonebreaker’ is of a decent length and as such has room for the band to be expansive, so there are short down beat interludes to break up the fairly rampaging tone set by this track.

A more intricate sound abounds during ‘Drawn Astray’ which opens to the soft patter of flesh on Bodhrán, a framed Irish drum, as well as more acoustic guitar. Once this track opens up it sets a far more methodical pace, with a bass heavy rhythm and thoughtful guitar melodies. Another lengthy and expansive track, this one soon fans out into a faster pace with unrelenting drum beats and stark guitar leads, though this song feels like it is led more by the furious bass tones. And those marauding tones are continued into ‘Forlorn Peaks’, and are then joined by equally ice edged riffs.

Following a short interlude track, ‘A Distant Fire’ concludes with the epically long title track which harnesses everything the band have so far put together and combine it all in a flowing, changeable finale; rising slowly and steadily to a crescendo before hurtling over the cliff of extremity for last bout of aggression. In truth this album is well written and well performed, but feels a little unspectacular. It is aesthetically pleasing and well put together, but it doesn’t really spark any excitement in me.