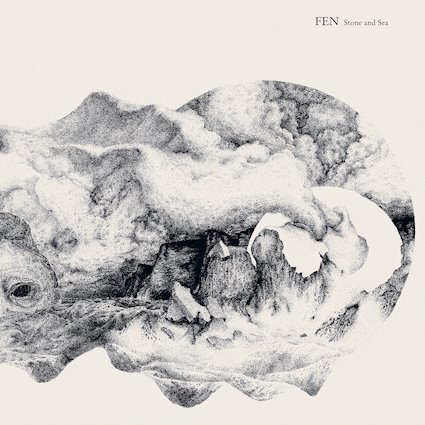 Fen just never seems to disappoint us, they have and are always willing to take the next step, with each and every release, to further their, already masterful, touch on the atmospheric, neo-folk, post-rock, post-black, Black Metal gene pool of which they have always swam around in. Now, to be honest with you all, I just shamelessly stole that opening line from a review that I did for their glorious album “Dustwaker” all the way back in 2013, but alas I still feel the sentiment is extremely spot on. Fen has yet to disappoint, period, ever, from their outstanding debut EP, “Ancient Sorrow,” all the way up to this new, amazing, EP, “Stone And Sea.”

While we are in the honest mode here, I do have to put it out there that this release is not really a “new” EP per say. It is in fact basically, well not basically, it just is a re-release taken from a split release put out in 2016 with the band Sleepwalker, titled “Call Of Ashes II / Stone And Sea,” naturally. The aforementioned band has been removed from the equation and now it’s just Fen’s contribution put out as a three track EP for those of us fans who don’t always go for or even seem to notice the splits most of the time. And no offense to Sleepwalker, for I am sure their part of the split was good, if not truly exceptional, but I am just into Fen and would rather just listen to them.

So, on to Fen then. “Stone And Sea” is almost like a step back in time for Fen, not all the way mind you but it is still a lot more centered around the atmospheric Black Metal core that started this journey while still retaining their current identity of a more, shall we say, psychedelic, progressive, atmospheric amalgamation. A sound that can only be described as a homogeneous mixture of Negura Bunget, Drudkh, Alcest, Pink Floyd and Mono. So disgusting and gorgeous all at the same time.

Tides Of Glass opens “Stone And Sea” with an alluring intro before building into a masterpiece or a song. With ebbs and flows that touch on some of the harsher tones of Fen and back down to the softer moments before building back up again. Peaks and valleys, I love this stuff.  Stone And Sea comes up next as a gorgeous little instrumental piece. I’m hesitant to really call it an interlude but it does serve as a contemplative, meditative lush break from the ugly beauty that comes before and after. The Last Gravestone finishes this outstanding EP off with another amazing track that seems harsher than the first while still flowing up and down and all around such as Fen do.