Graceless – Where Vultures Know Your Name 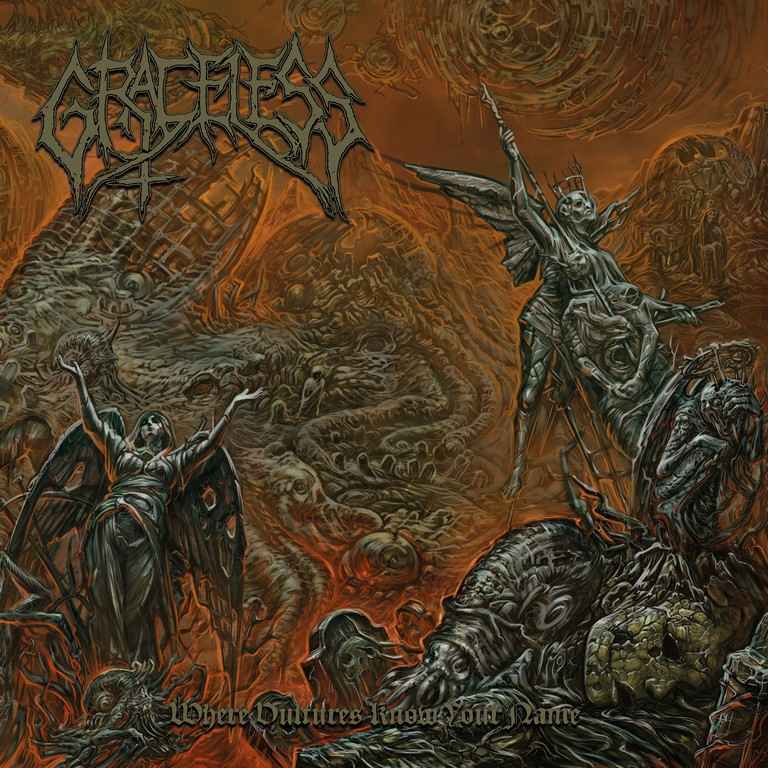 Way back in the mists of time, let’s say 2018, a band called Streams of Nothing, or Ponds of Zero, or something like that released an album titled “Where Owls Know My name”, and everyone went apeshit. They even included a fucking saxomophone, and all the fanboys went crazy and told everyone who had ears just how progressive and wonderful and talented they where. Didn’t matter that the rest of the album sucked major arse, and they had the audacity to call it Death Metal of some variety. Pigs bum to that, what a crock of shit. You want some real fucking Death Metal? Well here it is, and here them owls can go and well and truly get fucked, because this is “Where Vultures Know Your Name.” That’s right, they even have your phone number and are circling above as we speak.

Having said all that rubbish, i’ve gotta be completely honest here, Netherlands based Graceless have always been a bit hit and miss for me. Yeah sure, they have all the right elements that make Death Metal great, but yet they somehow never seemed to just release THAT album, you know the one that you just can’t stop playing, the one that becomes an obsession, all releases have been great, right up there with some of the best, but something seemed to be missing. Whatever it was to me, they have damn well found it, in spades.

I don’t know what the fuck they have been on lately, but this one, the aforementioned thing about nasty birds that have no feathers on their necks so they can stick their heads up dead animals bottoms to get to the tasty bits (and let’s not forget they know your postcode), is very well my pick of the year so far, and I do not say that lightly. Why is this so you may ask? It’s not rocket science really, this is about as good as you can get in my opinion, but always remember, opinions are like arseholes, everyone has one, just make sure you keep yours covered just in case some kind of fucked up bird tries to stick his (or hers, let’s be fair) head up there..

Opener “Lugdunum Batavorum” is just sheerly ridiculously heavy, the title being the name of a castle type thingy at the mouth of the Rhine river in the Netherlands, yes, I googled it, and yes this song very well invokes images of war, sieges, and shitloads of trebuchet throwing lead coated Rhinoceri at stone walls. The rolling relentless drums, the somewhat mournful riffs, reminiscent of (yes, you know I’m gonna say it) Bolt Thrower at their finest, perhaps a bit of Asphyx, a smidge of Hail of Bullets, that kind of thing, but taken to the next level. The lead work in this, and the whole album, gives me a James Murphy – “Cause of Death” kinda vibe, such is it’s magnificence. Song one, and already whoa.

Let us move onto my personal favourite on the album, that being track the fourth, “Nine Days of Mourning.” I’m gonna come right out and say this is almost doom like, and whether or not you like that statement, and I did say almost, you will appreciate what I am saying when you get into the proverbial guts of it, no vulture puns intended. “Saviour, why have you abandoned me”, such agony, such remorse, this fucker gives me goosebumps every time I play it. A quiet beggining, followed by massive waves of riffs that just push you down and down further into the hole Graceless have dug, a lurking monstrosity of a song, and the final exultation of “WHY, HAVE YOU, FORSAKEN ME, WHY, WHY, WHY”, well just fuck, my skin looks like a plucked goose again.

The next one,”Here Be Dragons”, again, pardon my French. FUCK! Just the perfect pick up after the last one, and Death Metal perfection. The chugging riffs, the whole shebang right on the spot, and again, magnificent lead work that invokes memories of the classic bands of ye olde days, Maiden and Preist would be proud, but also blown right off the fucking stage by the crushing riffs contained within. I kid you not. Title track,“Where Vultures Know Your Name” starts off with a bit of keyboard work, then diverges into some more magnificent doom type stuff, (Paradise Lost sounds right here) and then just crushes you into a bloody mess. See them cunts above you circling, yep, they now have a meal, and you are it. Solo’s again beyond any reproach, fitting the mood perfectly, but oh those riffs. So massive, so solid, so fucking brutal. Aaaarrgghh!

If I keep raving about this, my head is going to explode.. “Warpath” is again another lifter, the kind of song that makes you wanna break all of your grandmother’s china, or maybe step on a lego and not even blink. A full on assault in any way shape or form you can think of. Closer “Embrace the Rain”, well, fuck. More of those goose type things appear again. Methodical, precise, measured, magnificent, and devastating to say the least.

Graceless, you have achieved an absolute pinnacle here, and one that should go down in the history of mankind as a classic. Twenty years from now people will hear this and still say what the fuck. I salute you. (The Great Mackintosh)