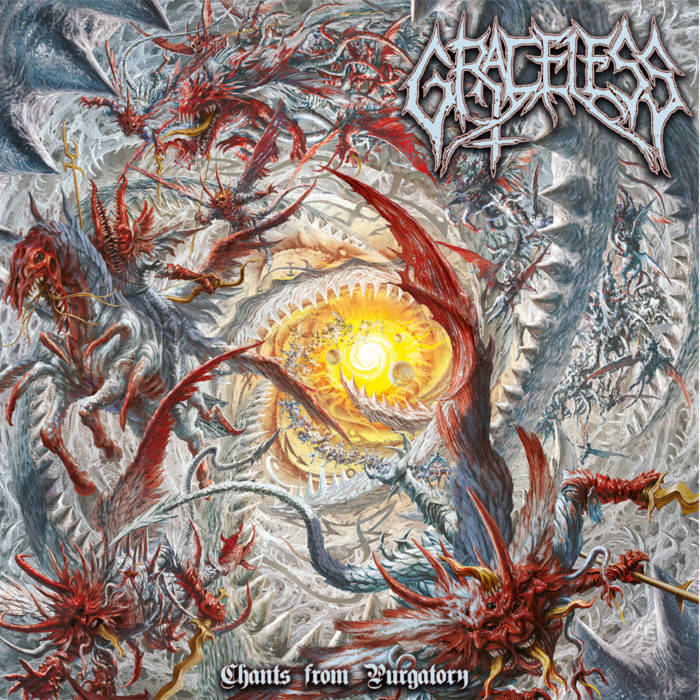 Dutch Death Metal outfit Graceless have been a band that has received quite some exposure over the recent years, their previous two albums and split releases have garnered positive response from press and fans alike. But in all honesty, I always regarded the band as just another slightly above average Death Metal band that uses some distant Doom/Death elements, the band’s new album, ‘Chants From Purgatory’ is just another example of just that.

The 45-minute clocking new album is just a continuation of where the band left off with ‘Where Vultures Know Your Name’, their previous album. Graceless offers mainly mid-tempo Death Metal that has been enhanced with some (well-crafted) guitar leads and some slower sections that bear resemblances with more classic Doom/Death Metal. The only noteworthy difference between the band’s preceding work is the more in-your-face production, it has a bit of a clearer and more crisp sound that opens up more possibilities for those guitar leads to shine.

But, just like the other Graceless recordings, this album also suffers from interchangeability. Without wanting to sound rude and with no ill-intent, Graceless just features no elements to distinguish itself from all those countless other bands in the genre. They all feature the same sort of chugging riffs, the same rather bland and flat sounding vocals and the same soulless production. It basically lacks that much necessary rawer edge to be really able to get that real Death Metal vibe to seep through, same goes for that aggressive punch and the dynamics in pace which usually makes an album to get a bit more of a unique sort of identity.

Though there is nothing really bad to be discovered on ‘Chants Of Purgatory’, it also doesn’t offer anything that is remotely memorable, making it a decent album but not one that I would recommend spending your hard earned money on.