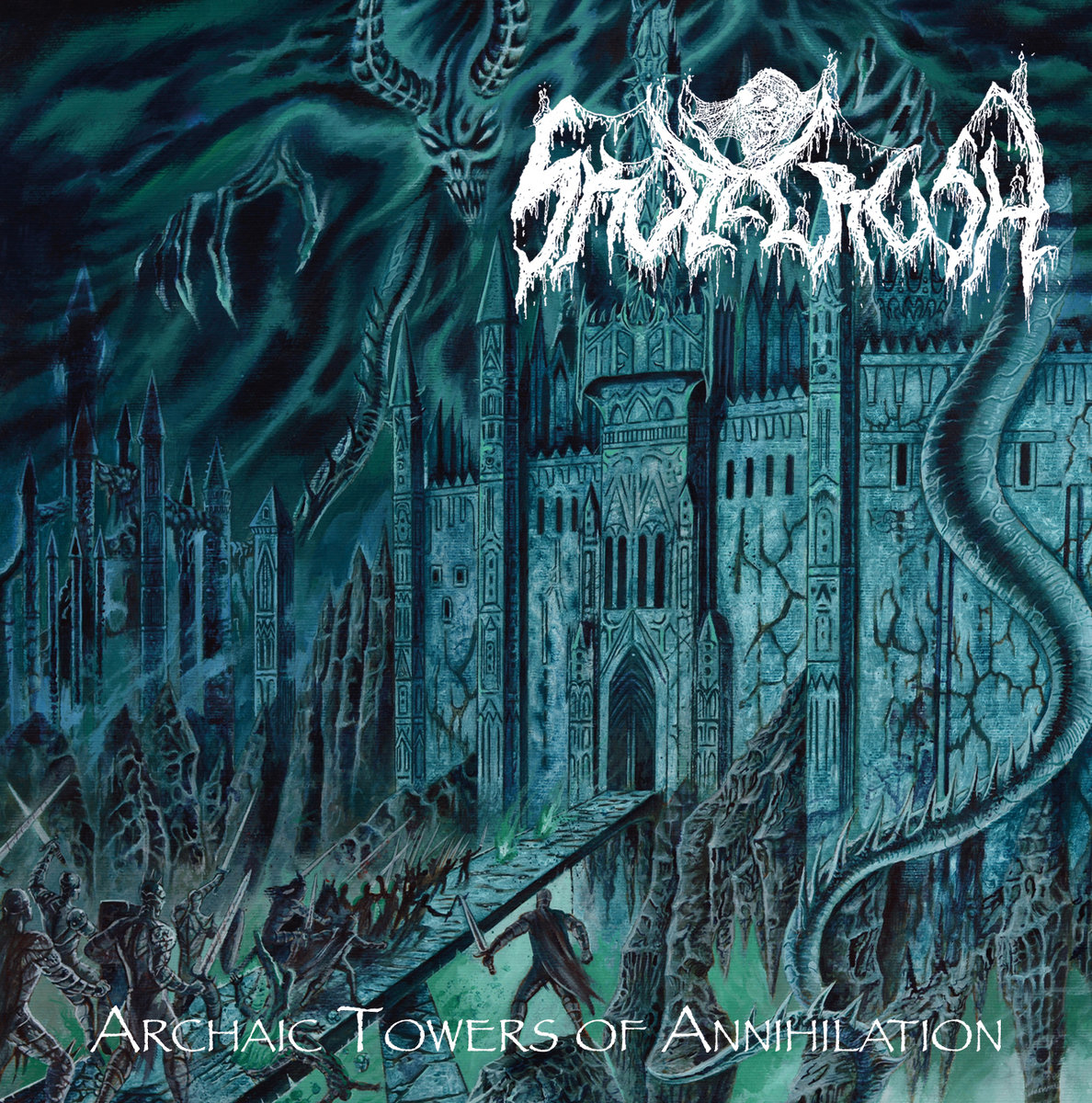 Waaaay back in the mists of time, let’s say 2018, I got the chance to review an EP called “Visions of the Firestorm Eclipse” by this band right here, Skullcrush. Let me just say this, they had me at the cover, all Conan the Barbarian like as it was, and so to steal a few seconds of your precious life, I’m going to provide you with a crapulent quote from that review, Please remember I was a younger man back then, so much time has passed in between.. Ha-ha.

“An exercise into how to pound one’s skull in with a very large axe. Call it a ‘Spectacle of Suffering”, walk through “The Mists Of Blood” if you dare. “Entrails Ablaze” will certainly set you on fire if you weren’t already, and “Hellwater”? Worse than having your entrails ablaze man, that shit really burns ha-ha. This little one here eclipses so many other shit bands out there that it will amaze you. With a tone like a runaway pack of heavily armoured lunatics, and a production bordering on the not so much like a polished breastplate, but more like a bloody gauntlet variety, this little collection of tunes to take with you on your way to Constantinople hits all my buttons, especially the ones involving medieval warfare and general fuckery with sharp bits of steel.”

I have a thing for bands that invoke images of medieval warfare apparently. Dudes running around hitting each other on the bonce with heavy weapons or pouring boiling oil onto others heads, that kind of thing. Maybe I am a sick sick man, but who fucking cares, it was, and still is a bloody fantastic effort. So now after what seems like an eternity, Skullcrush are here to, well, crush some more skulls! Yep, and “Archaic Towers of Annihilation”, being their first full length, is the perfect vessel to achieve said objective. This one has not only delivered, but exceeded ALL expectations.

Start at track the third we shall. “Monumental Tomb” begins as a somewhat jarring affair before turning into Death Metal supremacy. A blistering chugging riff fest worthy of the mighty Crom himself, and yes, you get what you were hoping for. More fucking top notch Death Metal my friends, after all, isn’t that what we are here for? None of this highly polished turd type stuff here, just honest to goodness wall to wall solid music of our favourite variety. “Halting the Ascension of Corroded Light” is a nice little interlude, perhaps it is our favourite Cimmerian God himself that we are treated to hearing before “Nightmares for the Blind” asserts it’s dominance, and what a fucking tune it is to behold.

Yeah, if you’ve heard this you are going to know what’s coming out of my mouth next. Bolt Thrower, Hail of Bulllets, Obituary, etc. et fucking cetera. Either I have a shit ear for music, or I BLOODY WELL LOVE THIS KIND OF THING! Maybe there is a reason I get given this type of stuff to review, and I’m more than happy with that. I could listen to this type of stuff until the sun turns black, explodes, and wipes us all of the face of the Earth, and when it is done this well, it makes my heart feel all warm and fuzzy. Man I love this shit.

I’m going to have to congratulate Raw Skull Recordz for keeping a hold of this lot, because Skullcrush have just proven that not only do their albums have great covers, not only did they release an EP worthy of anyones best of lists last year, they have followed it up with nothing but pure magnificence, and the epitome of what great Death Metal is all about. Doubt me? Check out the final two tracks, “Voice of the Abhorred Dread”, and “Foretoken Punishment”, (I have no idea why anyone would be punished for possessing a token, but I digress), If you cannot say that this one stands head and shoulders above most of the rest this year, then fuck right off. Over there, no, keep going, as far away as possible with your negative bullshit, because I will axe you to the face if you even blink in my general direction.

The only negative I see is now I have to reorganise my end of year list. I hate you Skullcrush, in a loving kind of way.. (The Great Mackintosh)