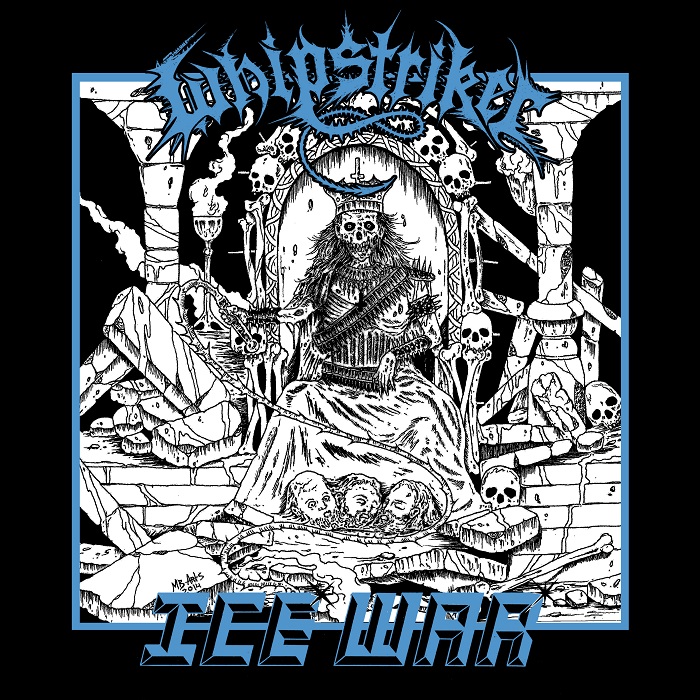 Mega busy Brazilian Heavy/Speed Metal have once more teamed up with another band to unleash another dose of violent spite. This time around they have collaborated with prolific Canadian one man Heavy/Speed Metal project Ice War who since 2015 has been relentless in his release rate. No cover tracks on this one, just three songs apiece of straight up Speed Metal, starting with Whipstriker’s ‘Restless Dogs’, a furious bass heavy ode with glacial guitar leads and a smooth, muffled drum sound and raw, aggressive vocal work. This is the latest release from the Brazilian filth lords and there are some Blackened/Thrash elements to this that I didn’t hear on their last couple of releases, as well as the pre-requisite amount of guitar solos for all of the musicians out there to get hard over. Whipstriker follow up the longest track on the split with two short slabs of chaos, the guttural hyper aggressive ‘Rot in Trench’ and the violently dark sounding ‘Morphine Soldiers’. Just typical Whipstriker doing typical Whipstriker things. Pure class as always.

This is my first encounter with Ice War, and Jo Capitalicide is a more than decent musician who displays his widdling chops from the very start of ‘Warfare Cry’. In truth I’m not a huge fan of his cleaner vocals, and keeping the right tone isn’t his strongest strength although he can certainly fucking wail when the situation calls for it. That’s a small gripe though and this super speed riff fest and high velocity drumming display is very impressive. ‘Grip of Death’ lowers the speed and increases the rhythm and groove element, as well as adding a little Punk influence to the guitar leads and melodies. interestingly his clean vocal style suits the punkier style song a hell of a lot more. Jo finishes of with ‘In Your Heart’, another high octane slice of old school wailing Speed Metal fury. In truth, the vocal display aside, this is a damn fine bout of true metal and I’ll be checking more of his stuff. (Marksson)