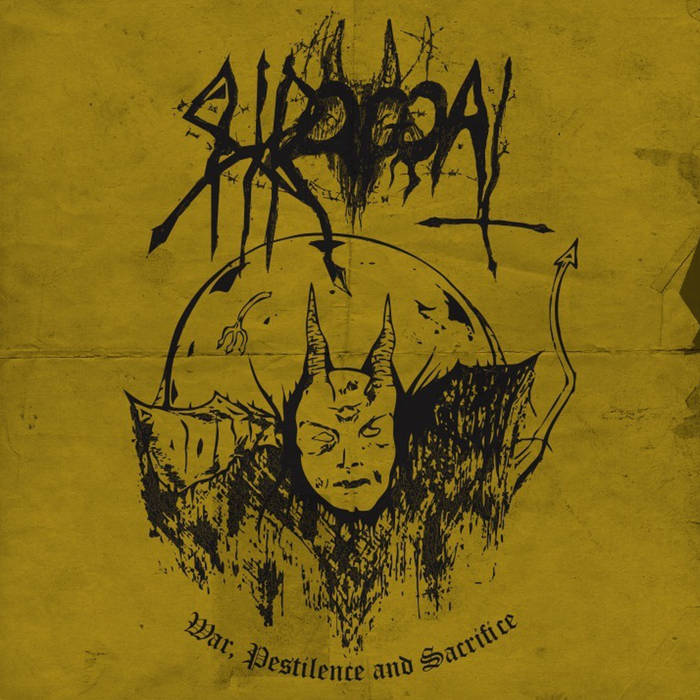 Schizogoat are a very young outfit by Jhônata ‘Hellfire’ Almeida, whom you might know from e.g. Infernal Attack or Corpse Forest amongst several others. After the demo Darkness And Pain, Jhônata (lead and rhythm guitars, basses and vocals) wrote, and started recording, some new elegies, assisted this time by well-known drummer Ramon Deathhammer (think: Devil, Hell Poison, Cadaverise, Nocturnal Fog e.a.). The result is a seven-headed demon, a demonic soundtrack that sees the unlight via the mighty and strongly upcoming label Helldprod Records from Portuguese soil and blood.

“War, Pestilence And Sacrifice” was recorded at Jhônata’s Schizo Noir Studio (the drums were registered at the Caverna Studio) and gets released in tape. The result got mixed and mastered at the No Limits Studio by Podridão / Beyond The Grave’s Ivi Kardec. That cassette edition is, logically, very limited in number of copies (eighty pieces, if I am not mistaken), and the devastating cover artwork was done by Mister Hellfire himself.

Anyway, to keep it short this time: what can you expect from these seven sweet lullabies? Well, we’re talking about a Brazilian act, so don’t expect any comfortable and easy-listening ear-candy. Schizogoat bring anti-trendy and somewhat classically-influenced Black Thrash fury, primal in essence, deeply rooted within the glorious scene of the Eighties. The whole is strongly guitar-based, with furious rhythms, chopping drum patterns, and raw, sulfur-spawning vocals. The tempo varies from mid-tempo to fast, but even the slower passages are at least as energetic and intolerant as the faster ones.

As said, the better part is based on the tradition of the Eighties; i.e. the Teutonic Thrash scene and the First Wave Black Metal scene sort of canalized into one speed-up experience. There are hints of the first Bathory recordings, elements from Hellhammer / early Celtic Frost (including some Tom Warrior-alike ‘ughs’), the festering nastiness of Dead Head, the speed-up manifestations of Necrodeath, and even some open-minded links with, let’s say, Sodom, Venom, Tormentor and Kreator, if you want to. Besides an overpowering energy and an evil obscurity, the whole withholds a certain groove within the leads – Black’n’Roll, baby! – and quite some hints that remind as well of the Old School Heavy / Speed Metal scene too.

“War, Pestilence And Sacrifice” does not renew. Actually, the better part lacks originality. But hey, do you care? I do not (either). The result is impressive, because of great song writing at the one hand, a fabulous execution at the second hand, and if you do have three arms / hands, well, at the third hand you have that magisterial and overwhelming production, hard-hitting and brutal without losing itself in über-clean decency.

On my digital promotional copy, they aren’t included, but the physical edition (tape) comes with the three tracks from the Darkness And Pain demo as bonus. All together: thank you, Helldprod Records! (Ivan “Concreteweb” Tibos)