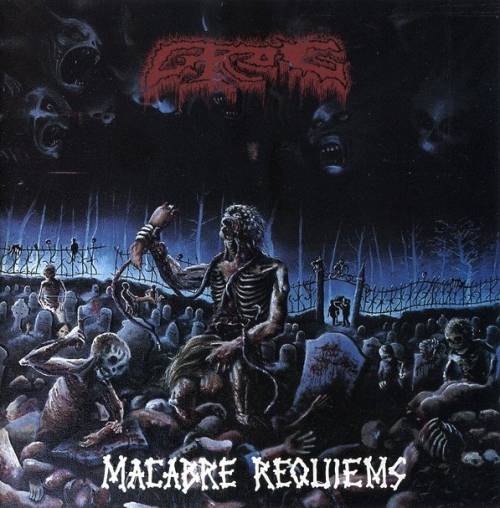 Grog is by no means a name unheard of in the Death/Grind fraternity. But just in case you’ve missed listening to them before, read on, you will not regret it.

The 1990s saw the release of the purest, rawest, most unalderated form of Death Metal, be it American, Swedish, British or even Norwegian. Grog was one of the pioneering bands that put Portugese Extreme Metal on the map. Aside from their unmatched Ferocity, their distinct horror and gore themed lyrics with the dark vibe of their music set them apart. Circa 1996, their debut full-length ‘Macabre Requiems’ showed it’s ugly face to the world and it was received phenomenally. Rightly so, as the album had the dirtiest, darkest and scariest vibe, any Death metal fan who loves Death Metal mixed with some Grindcore and then drenched completely in Gore will find that ‘Macabre Requiems’ is what they’ve been looking for.

It opens with a sick Intro that sets the mood perfectly, a track called ‘Embrace My Cold Body’. The guitar tones follow a traditional OSDM tonal approach, while the drumming is extremely well executed following a Death metal format with Grindcore added in for good measure. Macabre Requiems, although a savage and violent embodiment of the OSDM genre, this album features something a lot of Death Metal bands miss out on; melodic guitar sections that send shivers down your spine. While Macabre Requiems certainly isn’t much for originality or influential song-writing and also keeping in mind that Grog’s Magnum Opus is definitely their follow up album, ‘Ode To The Carnivorous’, there is no doubt that it is a fantastic debut full-length. It was also released at a time in the later 90s when the impetus of killer Death Metal releases saw a slow, yet steady decline. It is a criminally underrated release and the CD has been out of press for years. Until of course, the nice folks at Helldprod Records re-released this sick album and did the world a huge favour.

Fans of Autopsy, Brutal Truth, Baphomet, Devourment, Impetigo etc will feel like this is the best investment they’ve made in a while – maybe even years. (Sudarshan)