Whipstriker / Hate Them All – Strike of Hate [Split] 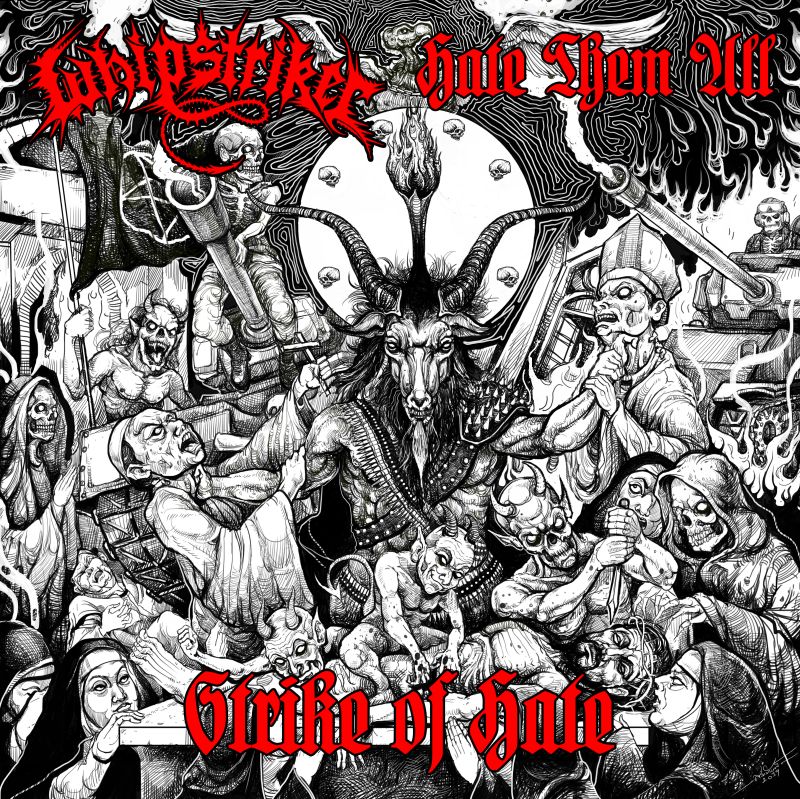 Brazilian Heavy/Speed crew Whipstriker and Polish Satanic/Anti-Christian Black Metal horde Hate Them All are both known for the prolific rate with which both bands put out split releases, and the formula changes not at all for ‘Strike of Hate’, an eight track slab of filthy aggression featuring some interesting cover versions and put out on CD by Old Temple.

Fun, fuzzy and full on, opening track ‘In Fires of Hell’ reminds me of a rawer version of Carnivore, which a bass heavy rumble throughout, punchy riffs and simple yet effective drumming, as well as a catchy chorus. Throw in some guitar based wankery in the form of short noodling solos and you have a decent opening stanza. “Forget the Future” has a more intensive and cavernous sound, mainly around the vocals which have a cool echoing dissonance about them. From there Whipstriker follow this up with a massively hard hitting version of ‘Endless Pain’ by Kreator which is faster and more direct than their original offerings but with the same level of murky production and performed with the same intensity, whilst their version of  Entombed’s ‘When Life Has Ceased’ is aggressive, Punk influenced and catchy, and yet they hit the darker, slower sections deliciously.

Polish BM was always going to cast a different vibe on this release and the opening bout of mayhem from Hate Them All entitled simply ‘Goats’ instantly loses the bass and heaviness of the previous half as the drums are mired poor production and the bass is none existent. To go from the crushing bombardment of Whipstriker to this feels like whiplash, a jolt from one hundred miles an hour to zero in an instant. That isn’t to say Hate Them All are a poor band, and they create short slabs of rage fuelled BM with a Punk like mentality and sporting simple direct riffs as well as harsh, guttural vocals. On top of that they have a groove laden cover of Impaled Nazarene’s ‘Blood is Thicker Than Water’ and then end on the bouncy vibes of ‘Riot Act’ by Skid Row. Sadly though Hate Them All suffer due to the crushing intensity of Whipstriker. On a stand alone release this would be decent but the contrast in production hinders them. (Marksson)