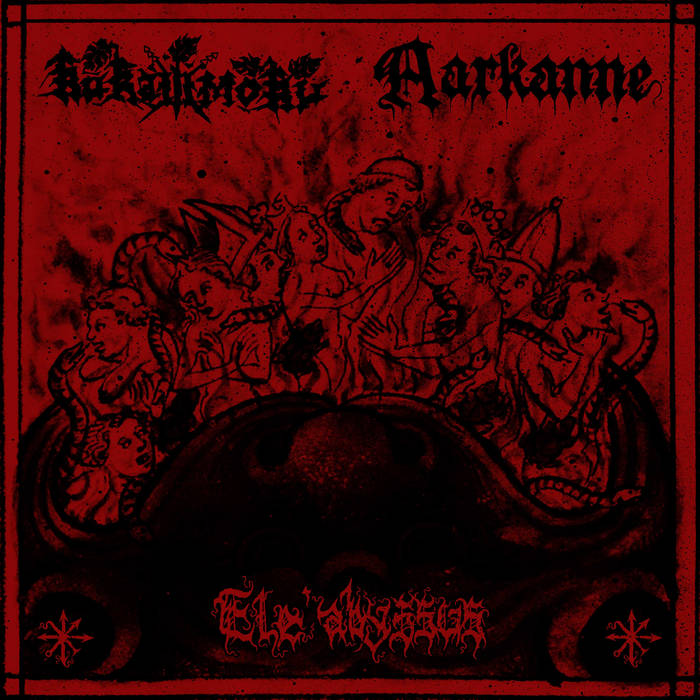 ‘Ele’abyssus’ is the title of a split LP between two rather stripped down Black Metal acts, Kūka’ilimoku from the USA and Aarkanne from Chile. Earlier releases by both acts have already been reviewed here at VM-Underground, so this might not be the first time you, as our faithful reader, encounter both entities.

Kūka’ilimoku opens the split with 5 short attacks that, just like we heard on the acts’ debut-album ‘Pahu O Ka Ua’ (2001, Expansion Abyss), sound like stripped down, primitive Ildjarnian Black Metal that got mixed up with low-fi Garage Rocking Punk. The spontaneous live sound adds to the total underground vibe and Punk attitude. For me personally the tracks on the full-length did work just a little better, because these tracks seemed recorded even rawer, but everyone into Kūwāha’ilo’s music will definitely dig this as it is hardly any different from his earlier recordings.

The other side of the split is reserved for Chile’s Aarkanne. A band that has yet to convince me, as the previous releases didn’t do much for me. The music on both the full-length and EP were a bit too standard and just very little to offer; underwhelming as a whole. The two songs presented here are not a major shift from what I’ve heard before from Aarkanne, but this time it works better. The sound is much more attractive, less clean and far more dense, which gives the music a better atmosphere. If this is the direction the band is heading with its future works, I am happy to hear what is coming next.

Of course, a split LP is not a game or battle, for that matter, but I definitely prefer the Kūka’ilimoku-side. That band has really something special going on. But, it is fair to say that Aarkanne kind of surprised me too, these two songs are their best offering to date.