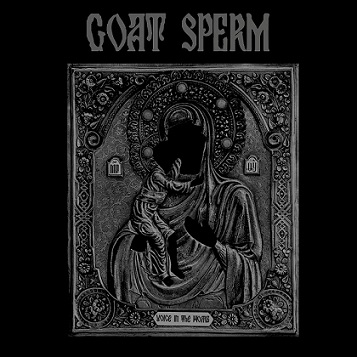 September is month of the goat! I picked four recent releases that all include ‘goat’ in the name to see how these capra inspired bands stack up. I’ve included a completely arbitrary ranking system for this batch as well.

First up on the sacrificial altar is Goat Sperm from Ukraine. Not to be confused with the German band of the same name who is now defunct or the similarly named Goat Semen from Peru, Goat Sperm is a brand new, original act with the members remaining anonymous. They have just released their debut EP, a 3 track album titled “Voice in the Womb’” which is a full death metal audio onslaught with fast riffs and equally ferocious drumming. Brutal vocals add a layer of filth and the bass tone is spot on.

The highlight for me is probably the eerie choir that comes in on the title track, the first one on the EP. It is followed by “Into the Deep Waters of Catacombs” a track that reminded me of The Catacombs in Dark Souls and would probably be enjoyed by the cantankerous blacksmith Vamos. The third track is “XXIV Elders” which starts off with a great bassline that leads into 8 more minutes of dark and heavy brutality.

Overall, it’s a decent first release, although perhaps lacking anything substantial to set them apart from the pack in the vast gorge that is death metal. It’s not bad, but it’s not mind blowing; it’s a decent 17 minutes, surely something everyone should try once, but I’m going to wipe off from this one and move on.