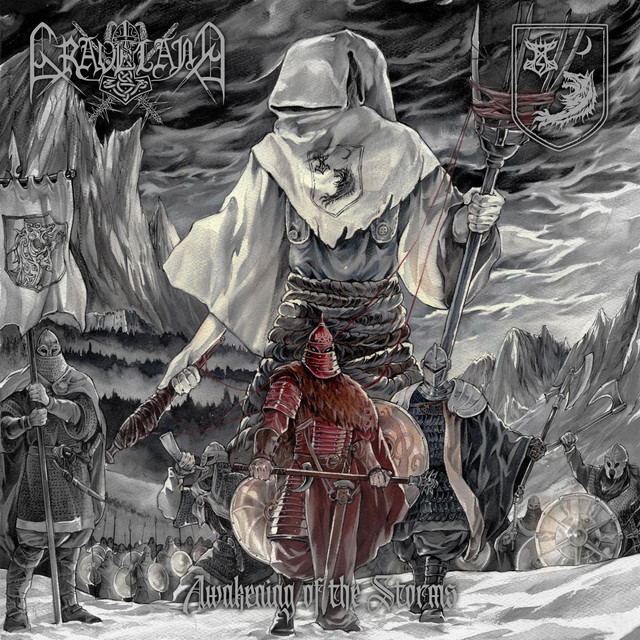 In the review for ‘Hour of Ragnarok’ here at VM-Underground of that last Graveland album I mentioned that it turned out as one of the bands’ best albums. So coming back with a new release made me curious whether they were able to push things further or at least keep up the level they’ve set for themselves. Though I have no clue, but it could very well be that the tracks for this split album had been recorded in the very same sessions as ‘Hour of Ragnarok’; it has the same crisp production that makes the music sound even more bombastic. This is just your trademark Graveland: it’s angular, it’s march-like, you hear heavy brass and percussion, bombastic choirs and heavy dissonances. Epic and huge sounding, Pagan Black Metal at its best.

The other half of the album is for Commander Agares. The act named after its sole member Agares, who has been a live-musician for Azaghal and Vargrav, and released its debut album ‘Legions of Descending Twilight’ in 2021, not coincidently by Inferna Profundus Records too. But they do not only share labels, but also their musical background and approach. Commander Agares’ part starts of with ‘Where We Are Crowned As Kings’ and sets the stage for the rest of the tracks. Basically it is not so much unlike Graveland’s own early steps: a rawer kind of Black Metal with a nice crunchy, buzzy sound. Still rather epic and with ditto pagan grandeur.

Definitely a nice split album with great performances from both acts. The dichotomy of this split album is also interesting in that while both acts have common ground and thus fit well together, they are also clearly not clones or able to get in each other’s way too much. Worth checking out.