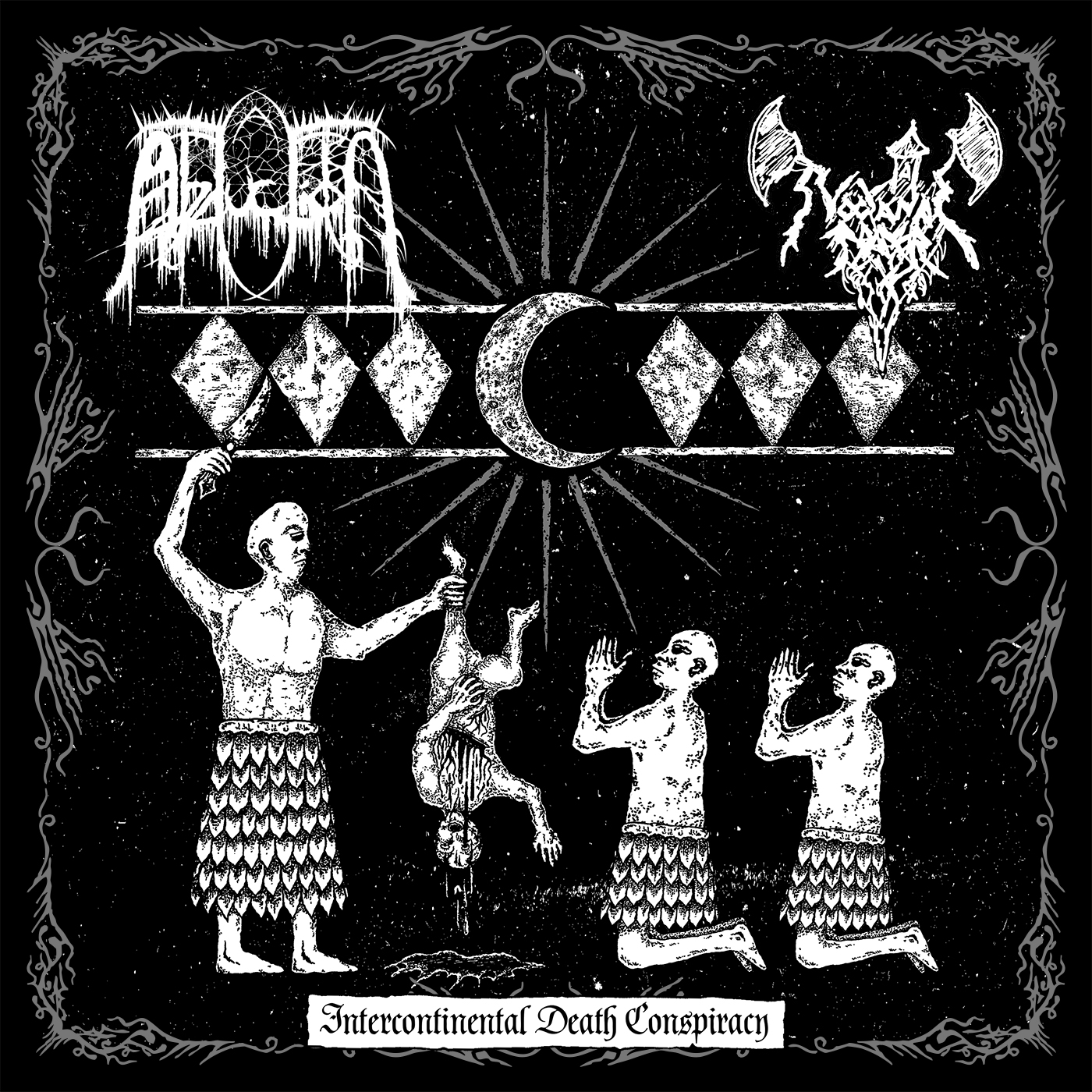 With the release of ‘Black Blood’ (the new album from UKBM band Abduction) immanent, now seems as good a time as any to have a peek back a couple of years and savour the darkness that was a split release between Abduction and Canadian Black Metal one man project Nocturnal Prayer. Entitled ‘Intercontinental Death Conspiracy’ and featuring seven unholy tracks, (Four from the UK and three from the Canadian side) the international flavour of this release is compounded by the Lithuanian label Inferna Profundus Records who saw fit to unleash this grim opus upon the world as a 12″ vinyl.

So lets start with the punishing assault that is Abduction. A short organ introduction tracks leads swiftly to cruel, savage rasping vocals, a torrent of blast-beats and rampaging riffs which all combine to forge a maelstrom of epic proportions, tempered by the glowering snarl, torturous tones and infernal malice of what Abduction produce when things are brought to a crawling pace. ‘Astral Projection’ in particular benefits from some far slower interludes in which Abduction, through superb song craft, ramp up the nihilistic atmosphere to a nightmarish proportion. Equally, ‘Cremation Sickness’ definitely benefits from a less blistering approach and due to it’s more crushing drumming and cavernous guitar tones, has almost an old school Death Metal feel to it. I’d say ‘Cremation Sickness’ is easily my favour part of the Abduction side to this split.

And so onto our Canadian counterparts, Nocturnal Prayer. A far clunkier sound greets you as ‘Leading The Tumbrels Of Afflict’ gets underway, though I do like the wandering guitar melody that runs through the track, as well as the crashing drums. A far more lo-fi tone for this half of the split, the drumming is pleasantly muffled, the riffs fuzzy and the shrieked vocals feel like they are coming at you from a distance. Whilst the first track is fairly plodding, ‘Drink The Kindled Flask Of Long’ is a much faster proposition. In places the musicianship is a little hit and miss, the odd dropped note or beat leading to a sporadic effort, but on the whole the track is listenable. In truth this lo-fi / sloppy style isn’t for me, and Abduction are far the stronger half of the split. That said, taste being what it is, I can see a few people being into this release as a whole. (Luke Hayhurst)