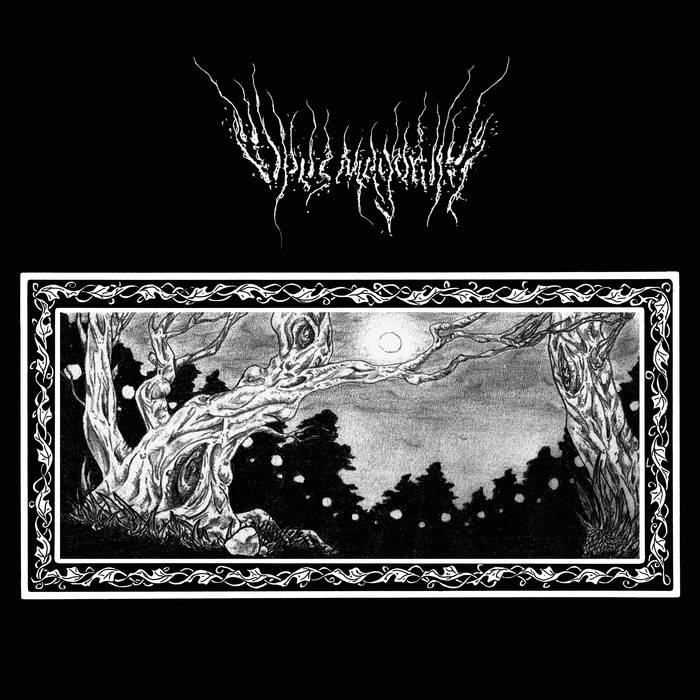 This Greek Black Metal band Opus Magorum has been around for over 20 years with its formation in 2001. But don’t feel embarrassed if you haven’t heard of them before, I didn’t get any further than just reading the name a few times either. In fact, the duo behind this band also has musical relations with a number of somewhat better known names from the Greek Black Metal scene such as Kawir, Caedes Cruenta, Disharmony and Ithaqua, for example. With Opus Magorum, the band has released about six demo tapes and a compilation/6-way split tape, the latest demo being from earlier this year. Inferna Profundus Records is now reissuing the self-titled demo from 2013 – at that time recorded solo by Nocturnal Call Of The Moon.

Anyone who thinks, for the sake of the Kawir and Ithaqua reference, that they have discovered an undiscovered gem from the Greek Black Metal tradition, will be somewhat disappointed. At least, if you can only enjoy that specific Hellenic sound, because Opus Magorum does present a decent portion of Black Metal. The Black Metal on ‘Opus Magorum’ is more based on the classic Scandinavian sound, with a slightly sawing and raw sound. Musical parallels can be drawn with bands like Darkthrone, Taake and Gorgoroth. The tempo is high, but not in hyper-speed, so that the repetitive and atmospheric melodies in the riffs are well highlighted. The sound of the demo is raw and gritty, but not unlistenable and in no way low-fi, but gives just the right atmosphere to the tracks. After having heard these demo-recordings a couple of times, I can only conclude that it is a real shame that this band has remained unnoticed for so long and that the releases are not available (anymore). So kudos (again) to Inferna Profundus Records, for digging up this underground gem. If your interest is piqued, be sure to listen to ‘The Vampyre’ or ‘Impalers Woods’, which for me are the highlights of this demo.

Its low output and obscurity, the last demo from January this year was also, like the original ‘Opus Magorum’ in 2013, released in only 60 copies, will keep Opus Magorum hidden for a while. In fact, this vinyl reissue is Opus Magorum’s first “real” release, and while the material is more than good enough to warrant a stand-alone release, I don’t expect it to change the band’s current status. Of course, that may be the band’s intent, but as far as I’m concerned, it’s a shame and I encourage the band to drag Opus Magorum more out of its shade. (FelixS)