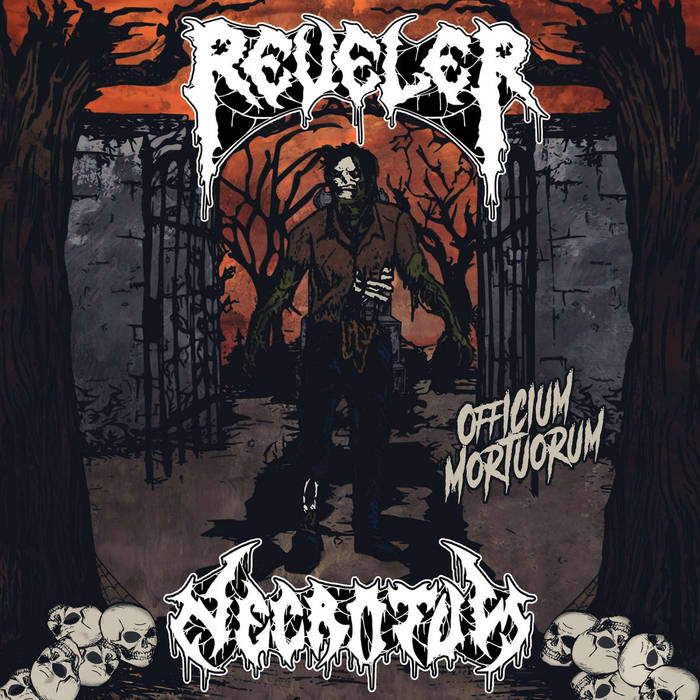 In the ever-growing discography of Romanian Death Metal band Necrotum, we now add this split release with American/Romanian Reveler. For fans, it is available on both CD and cassette tape via Morbid Chapel Records and Brutal Insanity Records, respectively.

After this overly familiar intro from the third film in the Exorcist series, the tension builds up considerably and you wait to see when the band cuts off the intro to chop away at it with the blunt axe. However, the band chose to let the sample run a little too long (personally, I would have cut it off already after “you son of a bitch” for maximum impact), which makes the momentum seem to have dissipated. Contrary to expectations, with the first track the band doesn’t exactly deliver a real sledgehammering punch in the face. On the contrary, actually. A rather weak a thin-sounding Death Metal is what you are presented with. Although there are quite a few good ideas to be discerned and especially the whammy-bar solos are quite well executed, the whole thing sounds mostly lifeless due to the powerless sound and bland production. Needless to say, at this point, Reveler does not yet convince.

Certainly not when you compare it to Necrotum. Which is a lot more solid in terms of sound. The trio was already characterised by a robust sound, but compared to Reveler, it sounds even more massive. And that while compared to the bands’ even heavier-sounding ‘Hanging Above The Deadpool’-EP these two songs (excluding the intro) actually only sounds half as colossal. Musically, though, it is exactly in line with the previous work. Riff-heavy and ultra-barbaric Old School Death Metal with a penchant for American branded Death Metal with a slightly technical twist. The good, chunky riffs, swinging drums and screaming guitar solos are once again the real tastemakers and thus ensure that this split release is still definitely worth listening to. But most of all, I will remember this split as a good inspiration to revisit the Exorcist films.