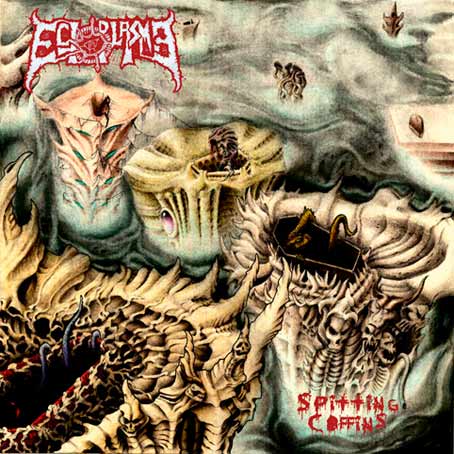 I really can’t help it but every time when I read “Ectoplasma”, immediately the movie “Ghostbusters” and especially the character “Slimer” pops into my mind. Sorry to the guys of Ectoplasma, sorry to you dear reader…now I mentioned it, you probably will have the same “problem” I have now. Ectoplasma from Greece hasn’t run a lot of miles or kilometers on the meter yet, but have released a demo, a split and this debut full length since the existence that started in 2013. While listening to the Old School Death Metal composed by the deadly gruesome twosome George Wolf and Giannis Grim, you will hear more influences from the US scene than any other one. As they have covered “Pagan Saviour” as last track on “Spitting Coffins”, it’s easy to point out Autopsy. But it’s more than only the masters of robbing a vacant bonesaw, as it also has hints of old Monstrosity, Morta Skuld and Morpheus Descends as well. So it’s quite clear; early 1990s US Death Metal with a bit of everything. Solos, riffs, pace-changes, groove, brutality…actually everything you would expect from a band who plays the early 1990s US Death Metal. “Spitting Coffins” is a good listen, an enjoyable one even, but I would be out on a limb if I called this a “must have” or “breathtaking” release. But “good listen” and “enjoyable” should be enough to get you interested and check out a track or 3.