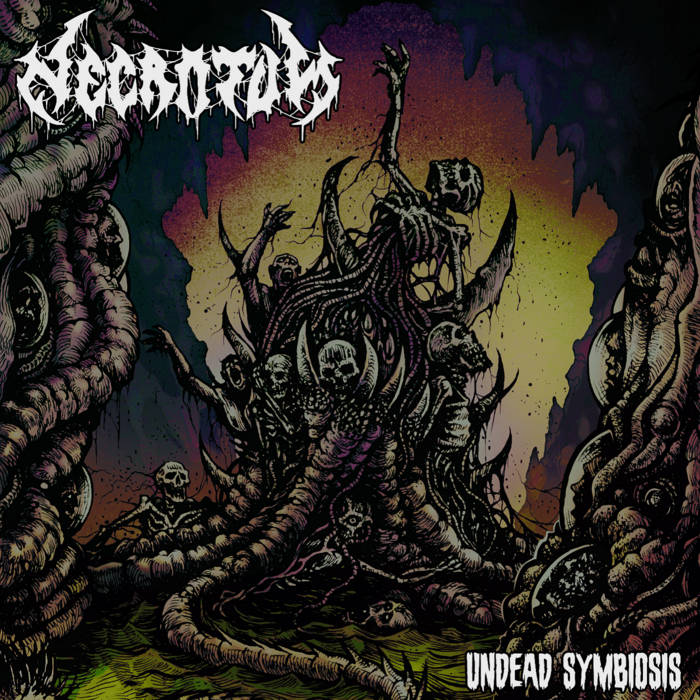 As a loyal reader of VM-Underground, chances are you’ve seen the name of Necrotum come up before. Not only did we discuss the 2020 demo ‘May The Dead Rise’, but more recently the ‘Hanging Above The Deadpool’ EP and the split CD with Reveler. With ‘Undead Symbiosis’, the Death Metal trio from Romania come up with their second full-length album and the third feat of 2022.

The first and foremost thing that stands out is the brighter sound on this album. As a result, ‘Undead Symbiosis’ sounds a bit more digital and clinical. It gives a bit more space to the various instruments, but with that, the band’s weakness also immediately comes to the fore. The digital-sounding drums and the more thin sound of the guitars detract a lot from the overall listening experience, it is also noticeable that the grunts are pretty weak (listen to ‘Necroception’, for instance). The Death Metal that lies midway between Cannibal Corpse and Mortician does not come off well on this second album. It lacks the ingenuity of Cannibal Corpse and the low-end depth and brutality of Mortician. Because the sound now demands less attention, the weaker compositions and the lack of musical talent stand out much more, something that in principle certainly does not have to be an impediment to making some nasty (Death) Metal. Although Necrotum again sounds just as unsubtle here, it chops its way through the army of zombies in a much less appealing way than they did before. Consequently, I can’t quite shake off the impression that this album sounds a bit like a rush job and there is more emphasis on quantity rather than quality. After the entertaining ‘Hanging Above The Deadpool’ EP (all three tracks of which, incidentally, also appeared on this album), this is really just downright a disappointment.