Necrotum – Hanging Above The Deadpool [EP] 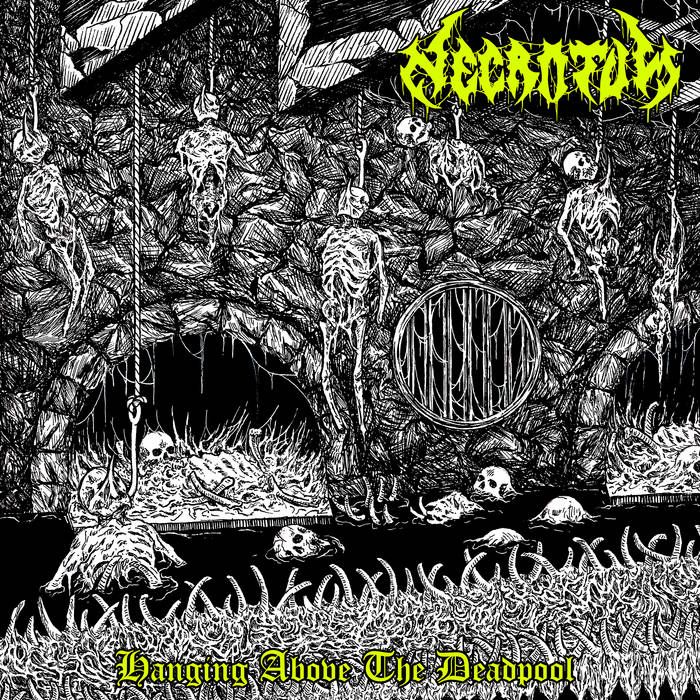 Earlier this year the Romanian Death Metal combo Necrotum released another chapter of Old School and moldly sounding Death Metal with this ‘Hanging Above The Deadpool’-EP. Despite the fact that the band has only been around for three years, Necrotum has already produced an impressive output. At the time of writing, their discography counts no less than 13 titles. There is no lack of enthusiasm and a healthy work ethos.

This 3-track EP, with a playing time of just over ten minutes, delivers a short slab of very much down tuned, riff-heavy Old School Death Metal feast. The tastefully chugging riffs, stomach-churningly deep gurgling vocals and the swinging Goregrind-like drum rhythms are much of a refreshing contrast to the massive, murky and moist production. So is that quirky almost St. Anger-like snare drum, which sounds as much out of place as on that reviled album, but it seems to be just working fine for Necrotum. The songs are clearly written according to a somewhat fixed pattern and therefore sound very cohesive. In fact, they seem to melt together as one indefinable heap of bloody pulp. And although Necrotum never sounds original or really like any award-winning Death Metal act, it does just seem to work out perfectly. Anyone into American-styled, underground, gory, brutal yet Old School Death Metal should check out this nice little EP as it comes with my highest recommendation.