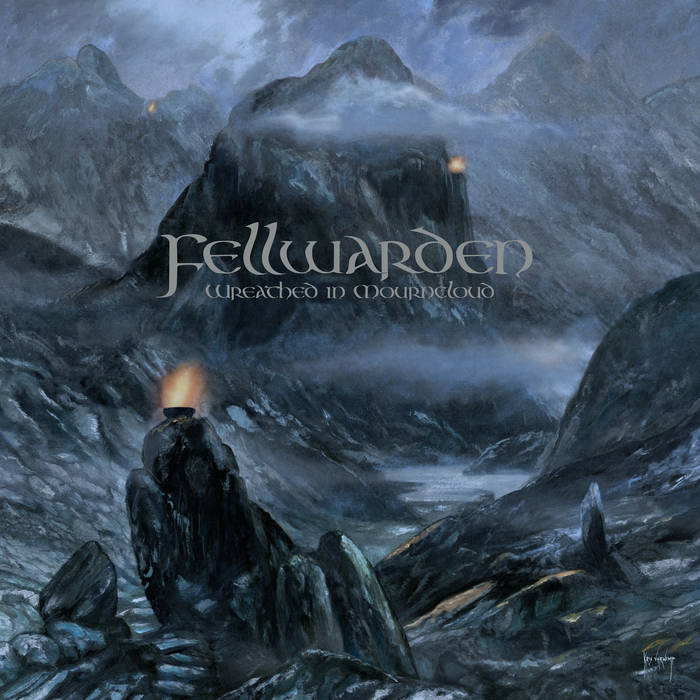 Fellwarden is a solo project by a man known as The Watcher, who is most famously acquainted with Fen. The project began in 2014 with an album called “Oathbreaker” coming out in 2017. Less straightforwardly heavy than its predecessor, Fellwarden’s newest release, “Wreathed in Mournclud”, combines everything that was present in “Oathbreaker” with some of the softer parts of Fen’s “Carrion Skies”, and the sprawling epic atmosphere of “The Deadlight”.

Comparisons to Fen are not necessarily something The Watcher tries to avoid with Fellwarden, but it does seem to me The Watcher is making a more conscious effort to be less aggressive and more traditional, giving off a more antiquated impression. Taking this into consideration, Fellwarden can be summed up as a bit of a Wolves in the Throne Room/Agalloch love-child. Atmospheric Black Metal with a deep sense of primordial expression.

Serving as the album’s side A are “Pathmaker”, “Scafell’s Blight”, and “A Premonition”, which together make an epic twenty-six-minute statement of their own. Taking you through peeks and valleys of immense heaviness and hollow tranquility.

“Wreathed In Mourncloud”, aside from being the album’s namesake, seamlessly pulls itself up into both dreamier and heavier territory, gliding into almost warriorlike overtones. An incredibly powerful song, and as a stand-alone track, I’d say the album’s highlight.

“An Elder Reconing” and “Upon Stone” call to the imagination in a grandiose way, however, helping us better appreciate the glorious cover image by Kris Verwimp (Uada, Vital Remains, Exmortus). One can hear the peaks and valleys; the grey-blue fogginess of struggle, and just enough hope to keep the fires burning.

The album ends with a chilly wind, beckoning for us to listen once more. Endings like these are what make albums great, because as listeners, the last thing we want is for the journey to be over. So, naturally, we wander the path on multiple occasions, noticing something new each time.

“Wreathed in Mourncloud” is a brilliant album that I will most certainly be playing repeatedly. I am confident that many of you will as well. (VUK)