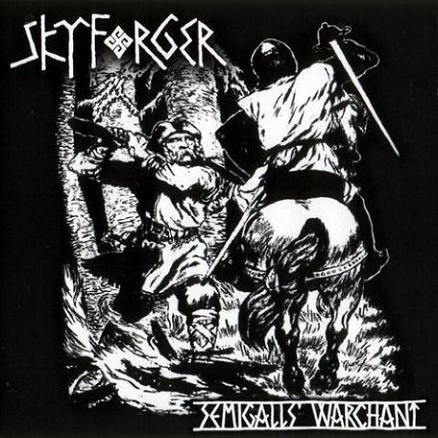 Hey, wait a minute: wasn’t “Semigalls’ Warchant” the title of Skyforger’s demo from 1997? That is correct! It concerns the same songs, yet this is a re-master from earlier this year, including four new songs (“To The Northern Shores”, “Bloodfield”, “Kăvi” and “Sunset Over The Sacred Forest”). Unlike the previous self-released Latvian pure folk orientated “Sword Song” this one is so to speak more back to the basics; (black) metal with folk elements, epic music so to say.

For those of you who don’t know Skyforger: think of Norwegian black metal like Immortal on certain epic parts of “Battles in the North”, also because Peter’s vocals are somewhere near Abbath’s voice, mixed with the primitive cumbrous elements of Burzum (not the insane vocals) and Forefather, and on top of that they mix in folk elements such as sound-scapes and Latvian instruments. Not that they have anything like Burzum actually, but it is the best way to describe the feeling. That all sounds promising, and it is: it’s like my former colleague Geert said in his review of “Tunderforge”: Skyforger is one of the better pagan/folk metal bands these days.

The old material is of course the most hulking and least folkish music the band has ever released (although  “Long I Heard, Now I See” is pure folk singing), and what is most interesting: how about the four new tracks? Well, they are different! “To The Northern Shores” is less hulking; the sound has more of a straightforward heavy metal feeling (or from the black thrash area) and the element of folk is more present: in this “To The Northern Shores” I can already hear three different folk instruments, and it is less dark, more epic than before. The bluntness of the demo material is gone; it is more fast forward, and regarding the success of a band of Ensiferum at Wacken I think this new material will also appeal to fans of that band, that prefer it a bit darker. Also “Bloodfield” is rather fast forward, with some furious bass drumming, but the vocals are typically pagan, though there is hardly use of a folk instrument: in fact, only the end has a kind of keys like and a small piece of a Latvian ancient flute, but not to be seen as an integral part of the song, more a rippling to end the song, like a modest wave at ebb. In this new songs it can be heard that Latvia is not only part of the former Soviet Republic, but also geographically in the neighborhood of Finland, because the fluent melodies have become close to those Finnish pagan/folkish bands, also regarding the structure of the vocal melodies and the way Peter spits out his lines. “Kăvi” is even much more an exponent of that approach than “Bloodfield” already is, less aggressive and more controlled speed… “Sunset Over The Sacred Forest” finishes this album, and that title already sounds as if it could have been on Quorthon’s last heritage to us, “Nordland I & II”. A pure intro/outro with flutes and the sounds from the shore?

The new material is indeed evolution in the technical way of speaking, but I like the band so much for their primitive, hulking way which gives them much more of an own face: the emotion-factor so to say. And the fact that they are getting more towards the sound of especially the Finnish paganish acts. Sure, the use of the Folk instruments is still there, and it still is dark and well- played, what could I complain? I don?t know, it is a matter of gut feeling. It is very good, but is it better than what is was? That is a hard question to answer. But if you should think that this album is not worth its money, rest assured: it is a very good album, well worth your money. I myself am very curious towards the upcoming album, as in this moment I am having serious problems to see which way the band is going. It could be either ways, so I can’t answer that one right now… I am sure it will become an interesting development! (Neithan)