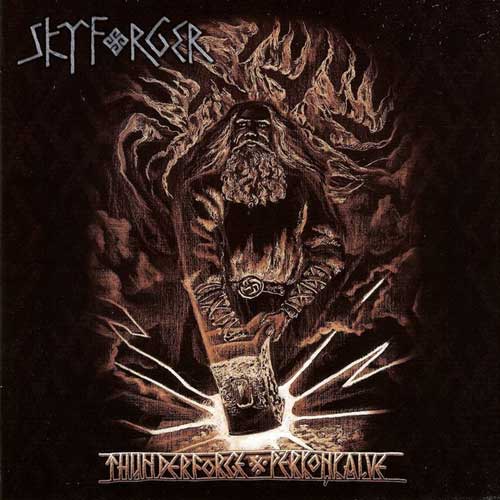 Skyforger is one of the better pagan/folk metal bands these days. Thunderforge is the third album of the band, It started out somewhere in 1995 when members of the band Grindmaster Dead decided to change their name into Skyforger. The first 2 years there were some line-up problems and in 1997 the first (and only) demo tape ‘Semigalls’ Warchant’ was released. The demo was send to several labels and at the end of 1997 the band signed a contract by the Dutch label ‘Mascot Records’ and released 2 albums ‘The Battle of Saule’ and ‘Latvian Riflemen’ on this label. After the quite successful 2nd album ‘Latvian Riflemen’, Skyforger left Mascot Records and signed a deal with the German label, Folter Records. The first sign of life on this label is ‘Thunderforge’.

The band is well known in the pagan/folk metal scene, so many of that people will already be the proud owner of a copy of Thunderforge. Most notable on ‘Thunderforge’ are the folk influences, they are more presented than ever before. Also the songs are in general more melodic and slower than on previous albums. Yet the typical style of Skyforger is still alive, so I can say ‘Thunderforge’ is the result of a natural musical development during the years. The lyrics are dealing with the mythology of ancient Latvia; and are printed in the booklet of the album in both the English and Latvian language.

Some notable songs on ‘Thunderforge’: The album starts after the intro with ‘When Ūsiņš Rides’ this is one of the oldest songs of Skyforger, yet never recorded before, it’s one of the doomiest Skyforger song ever. And like in most songs on the album the ‘kokle’; some kind of flute. Plays an important role in the song. The next song ‘The Shortest night of the Year’ is based on 2 national Latvian songs. One in the first part of the song and the other at the end, played with bagpipes. This song is quite cheerful. The 5th song on the album ‘Long Dance’ is a traditional Latvian wedding song, and one of the best songs on the album. The first part is pure folkloristic yet on the half of the song heavy guitars and drums are playing the same folky rhythm as the folk instruments does. An other notable song is ‘Through the gates of the world beyond’, this song is about olden funeral customs and ancestors’ believes about life after death. This song is a re-recorded one. The original was recorded in the beginning period of the band and can be found on the native metal compilation ‘Black Friday 13’ with the original title ‘The Legend’.

‘Thunderforge’ is in my opinion the best Skyforger album so far. The folk element is more presented than ever before, yet this makes the songs more interesting. Since about 1,5 month a new Skyforger album is released; the title is ‘Sword Song’, but this time it’s a 100% folk album, so without the metal element. Hopefully this will not be definitive, and will the band record the next time again a ‘metal’ album. (GeertVM)