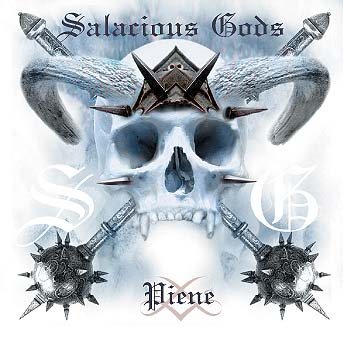 A few years ago I saw Taake in Hengelo, together with Horna and Salacious Gods. I wasn’t too impressed with Salacious Gods at that time, but later on I heard they just had a new drummer, and meanwhile they also changed their musical course; away from melody and towards more intensity. Well, two things before I go on: drummer Fjildslach steals the show on this “Piene”, and if he was already drumming in Hengelo, he has taken his revenge on me. The other thing is that I am not hesitating to say that “Piene” is Salacious Gods best album ever!!!

Throughout the years Salacious Gods have eliminated the melodic aspect of their music (they dropped the keyboards and took a second guitarist) and the keywords of today are ferocity and intensity. Especially Fjildslach (battle) is phenomenal with his bass drumming, blast beats which provide a basis for the band to thrive on? “Knekelvoeste” opens all saying; what a bomb shell! The leaflet says that he band is now trying to get a sound somewhere between Bathory and Nocturnal Breed, but I see other influences; especially the show with Taake must have had its influence on the band, regarding the vocals and the way the guitars are done; this comes more to the front on tracks like “Ieskaold in Piene” and “Striem’n op de Pokkel 1227”. Yet I must warn you, as Salacious Gods is way more fast forward and have definitely given their own turn to it? Other small influences come from thrash metal (not the bay area thrash) and some guitar arranegements on “Annexation to the Pentagram” recall memories of Sabbat’s legendary debut “History of a Time To Come”, though Salacious Gods doesn’t sound like that band at all.

The first part is a bit more furious that the second part: 6th track “Hexencult” is a direction that the band wishes to continue in the future; a good song, but to me the first part of the album is as good, and I don’t see the typical Bathory influence, unless it the reference is about the first albums of Bathory, when Quorthon was yet to develop his Viking metal? What I do hear is more and tighter breaks, a bit more thrash and old school metal riffs, adapted to black metal.. The most epic part of the album is at the end of already mentioned “Ieskaold in Piene”, not on this “Hexencult”.

The band has created an album with short songs, and the breaks are mostly not from ultra fast to slow, but from fast to ultra fast and vice versa, in which way Salacious Gods manages to maintain the fury within their songs. On occasions the band feels like a machine gun, it is just that this one is firing 88 cm shells! The production is fitting; not overdone, but well done, all the instruments in the right balance for this kind of music. If you like your black metal at high speed, yet with enough variation and a lot of intensity, you?d better listen to this “Piene”, an album on which not only the band, but also the entire Dutch black metal scene can be very proud? Highly to be recommended! (Neithan)