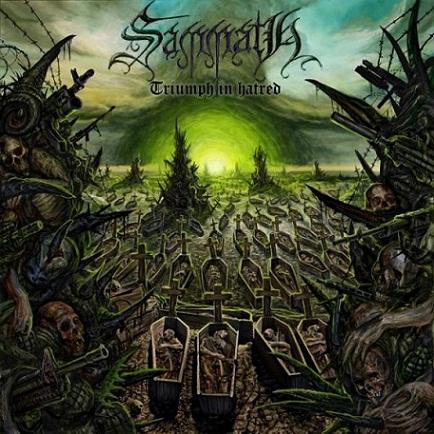 Dutch band Sammath released their fourth full-length album titled “Triumph in Hatred” through the Folter Records label. This black metal band has recorded 7 songs, which all got duration for more than four minutes and a half. Most remarkable thing on this album is the fact that the vocals from J.Kruitwagen do remind me of the one from Abbath, the well-known vocalist from the Norwegian black metal masters Immortal. The same ferocity is notable according to me.

What more can I say about this release? Well, first off all, this album in its total kicks ass, and all tracks are filled with tempo-changes and typical black metal drums and blastbeats. However, this isn’t an old school black metal album, because the melodic touch that appears in this album got a little Dimmu Borgir kind of feeling. Also a big compliment for the excellent cover, the artwork is amazing! They only have to see in the future that they work out their songs properly, because track “Damnation” suddenly stops, and I don’t see the point in that…But, as said before, this album is one of great quality, and I’m sure that black metal fans will be charmed by this release from Sammath. (Fredde)