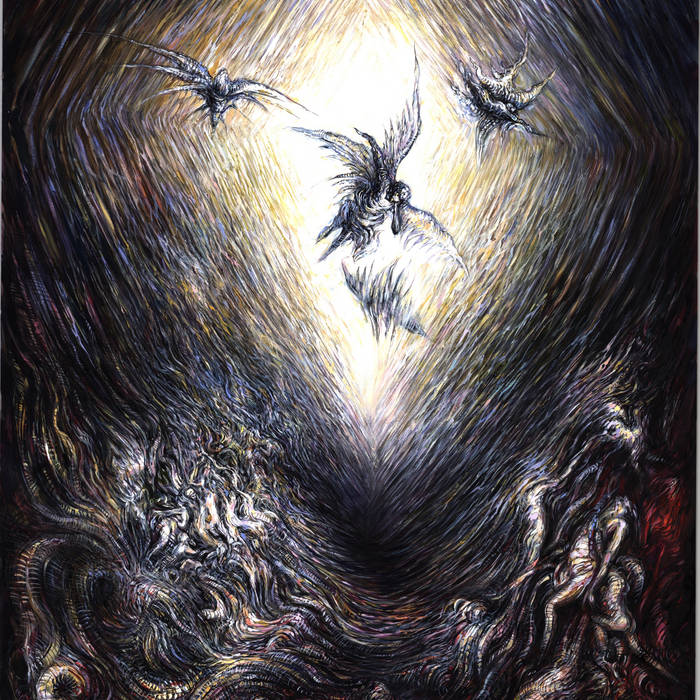 As we ease slowly into 2023, I’m looking backwards into the first quarter of 2021 and a wonderfully impressive debut EP from a country with a very small population and a very high number of Black Metal bands. I am of course talking about my favourite place on earth, Iceland, and the band in question is Forsmán, a quartet of highly talented musicians and song writers who hail from Kópavogur, a small town that connects on to the south side of Reykjavík. The EP itself is entitled ‘Dönsum í logans ljóma’ which when translated from Icelandic has the enigmatic name of ‘Let’s dance in the glow of the flame’ and stirs up images of nocturnal campsites in the gloom of winter, lit only by the naked flames and star light. Such a powerful release deserves label backing and it most certainly got it, with German label Ván Records picking up the CD and LP duties, whilst Icelandic label Vánagandr put out the cassette.

Opening track ‘Falsgoð’ really needs no great explanation as to its meaning, but I will mention the fervent vitriol with which the lyrics are written. I had to use an online translator as the band write and perform in their native tongue, but there hatred for gullible is very apparent, as it the desire to burn the scriptures and destroy their prayer houses as well as “Let the executioners of our truth attack the prophets of deceit and smile as they hang on the gallows of corruption and lust.” Further to this there is more detail on those who feed on the poor, on the desperate with lies and malice, before decrying the evil that has swept over their beautiful lands and a rabble rousing cry to be the torchbearers of the false gods destruction whilst also remembering long dead ancestors. Musically the track is a heady and mesmerizing combination of raw, growled vocal work with frostbitten violence spat out at every word, a thoroughly intensive and all consuming drumming style like a maelstrom of Arctic skins being beaten by some Icelandic God of battle, a bleak sounding guitar melody that grinds and crawls forward at a painfully grim pace, and sturdy, murderous bass tones.

‘Milli eilífðar og einskis’ (Between eternity and nothingness) talks of an endless and futile search for wisdom. “Lives spent searching for lost shores. Their sands hide writings, which open the gates of wisdom. One golden grain of sand would be worth searching for.” The song ends by speaking of the end of ignorant monarchies, which again I assume refers to Christianity. The musical offering of this track remains rigidly similar to the opening track, though with a faster outpouring of spite and malice as well as a more urgent tone to the guitars. Once more the cataclysmic roar from the vocals is unleashed like a winter storm and whilst the style of vocalists V and M suit Black Metal nicely, they would also easily find a home with some cavernous European Death Metal entity.

The third of four tracks, ‘Vonarglæta’ means the joy of hope and seems to be more of a look back across the centuries to distant ancestors and wars fought in the glacial wilderness of Iceland’s bleak landscape. (I may be wrong on this) more surging riffs and colossal drum tones are the order of the day here as the EP seems to be building through each track in a crescendo of ferocious and bleak beats and tones. The EP closes with ‘Hamfarir’ which simply means disaster, a track that speaks of death, despair and a hard fought war with an enemy that I once again assume to be religion. This is the EP’s most poignant sounding song; it has a distinct end of release feel that I think all good releases should contain. I said that the first three tracks were building to a crescendo, well here there is a final release, one last outpouring of grief and hatred and desperation that manifests itself through a more anguished tone in the vocals, and a slightly mournful tinge to the guitar melodies.

A truly stunning EP is ‘Dönsum í logans ljóma’; a true blast of savage brutality with a surging grace to it, and an eloquence about the lyrics. A full album release from Forsmán would be very welcome.