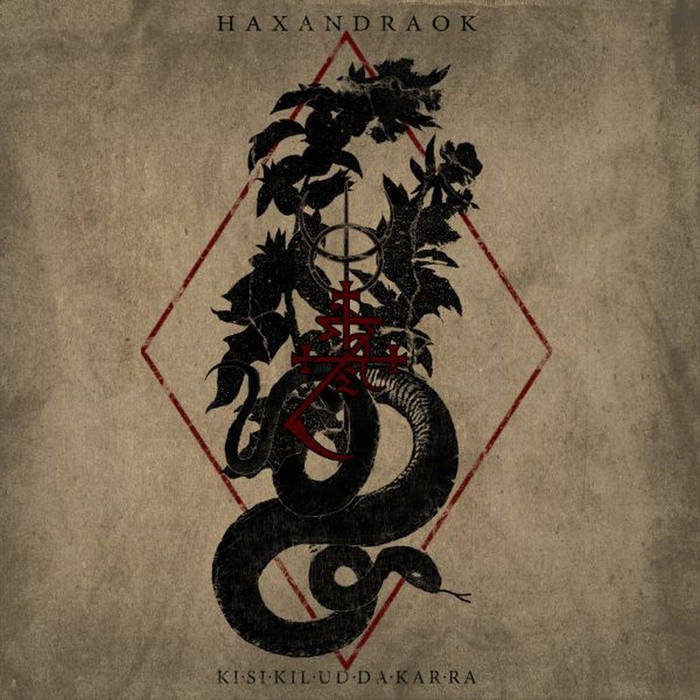 Strange sounding bandnames and even stranger titles, might be some occult Black Metal.

Yes, you are right! Haxandraok are a Greek/International project that was launched in 2018 by Marcello Szumowski (ex-Besatt/Inferno..) and Saevus H. Aldra-Al-Melekh (Acherontas, Devathorn, Shibalba…). In only 1 year their debut album is out with the lovely name “Ki Si Kil Ud Da Kar Ra”. Bass duties were handled by Arkhus A. (Devathorn..).

The trio captured a 30 minutes trip that sounds like 1 song, or at least it flows nicely like on together, which, thanks to its oriental scales, sounds so incredibly good, I could finish the review here.

5 tracks of draconian wisdoms, somewhere between Melechesh, Devathorn and the likes, with versatile riffing, drumming and vocals. Big standout are truly the voclas by Saevus which are mostly different to what you will hear on a Black Metal record.  On the musical side don’t expect your generic nineties worship (the spirit is transferred, but in a forward thinking way as meant to be).

30 minutes well spent into the realms of the occult, entrancing, enchanting, rich of ideas, fresh and recommended If you like the works he is involved, like a different approach to the occult Black Metal for the most time and If you just like well written Black Metal with a nice atmosphere to dwell in! Strong debut! Ho Drakon Ho Megas! (DPF)