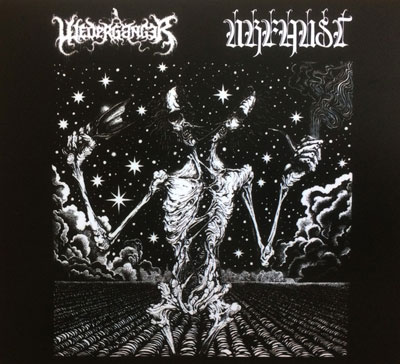 Wederganger and Urfaust are both Dutch bands with a very hypnotic style of black metal that draws the listener in completely. Both consist of very experienced members. Wederganger being the younger band, with their first and only full length released in 2015. Urfaust, probably the more well known of the two bands, has been active since 2003 and have 4 full lengths to their name. Wederganger has two songs on this split ‘Heengegaan’ and ‘De Gebrokene’. Both these songs excellently utilize the dynamic of two vocalist. The booming clean vocals of Alfschijn giving a stark contrast with the harsh, nasty vocals of Botmuyl. ‘Heengegaan’ opens the album with buzz saw guitars and a slow, doomy drum. With the vocals of Alfschijn this builds a hypnotic tension. Building up to the point where the drums burst into real action and Botmuyl shows the full nastiness of his voice. ‘De Gebrokene’ is a more aggressive song and will definitely force the listener to bang his head in approval. These two songs give a nice balance on the a side. Reflecting how the two vocalist hold each other in balance. Hypnotic and able to burst with energy would be a very accurate description of the Wederganger side of this LP. These men do, as usual, not disappoint. Urfaust also has two songs, ending this 22 minute LP with a slow and hypnotic b side. Their first song ‘Zelfbestraffingsten denz en occulte raadsels’ opens with a powerful drum and singing guitar, vocals, coming from the background more to the front, again, add an hypnotic and even occult feeling. Though certainly well executed I personally would expect more from Urfaust, I find the song getting a bit boring the longer it goes on. The same problem is even more present in the second song ‘Hypnotisch bevel – de daimonische mensch’ towards the ending the song gets drown out and you start to wonder when it will be finished. Which is a shame because that’s really the one big issue I have with this album. In conclusion, Buy this album for the Wederganger side, unless you are a big Urfaust fan they have put out much better material then this. (Svart)