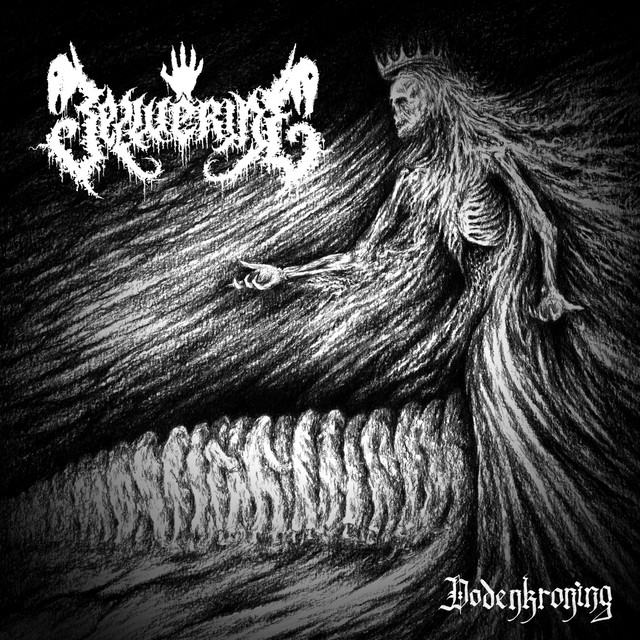 I have regarded Bezwering’s debut album, ‘Aan De Wormen Overgeleverd’, as one of the better Dutch Black Metal albums of recent years and a more than worthy successor to Wederganger, on which grave Bezwering was founded. Not very long ago, Bezwering released a split 7″ EP with Danish/Italian The Rite and yet its full-length successor unexpectedly saw the light of day at the end of last year: ‘Dodenkroning’.

And to start right off, ‘Dodenkroning’ has become a significantly different album from its predecessor. Though by no means a copy, ‘Aan De Wormen Overgeleverd’ was a logical follow-up to Wederganger on a musical level. It had many of the same harmonies and Alfschijn’s solemn and operatic vocals took care of the rest. On ‘Dodenkroning’, the band has brought things back to the essence of Black Metal: a rawer approach and a lot more focus on the riffs. With this musical direction, the band is heading in a distinctly more Norwegian direction. With the buzzsawing riffs and dual vocals, with bassist Onzalige providing the rough edge and Alfschijn once again shining with his almost serene, epic vocals, the sound on ‘Dodenkroning’ holds roughly the middle ground between Enslaved’s ‘Eld’ and ‘Blodhemn’ albums and something close to Carpathian Forest’s most rocking efforts. This bareboned approach gives the music a categorically different ambience, while, at the very same time, not moving all too far away from the musical path chosen on their debut album.

Even while abandoning their very own trademarked sound and creeping up to those Norwegian giants, on this sophomore effort, the band still really sound very much as their own. Seemingly able to embed those more standard northern Black Metal elements into their own blend. One of the best examples on the album on which they both blend in their more rocking Black Metal side to what Bezwering’s tried and tested formula of epic Black Metal would be ‘Ontaarding’. A track that is predominantly mid-tempo and is built around a equally slow rocking riff that wouldn’t sound out of place on any of Carpathian Forest’s albums. In addition, the song is embellished with some well-executed guitar leads and the vocal duel on these is palpable.

So, it is not only with the unexpected release of a new album that Bezwering surprises, but also certainly with the musical turn it presents on ‘Dodenkroning’. This new musical twist is certainly not out of place, but for me personally, it does not have half the impact of the band’s debut album.