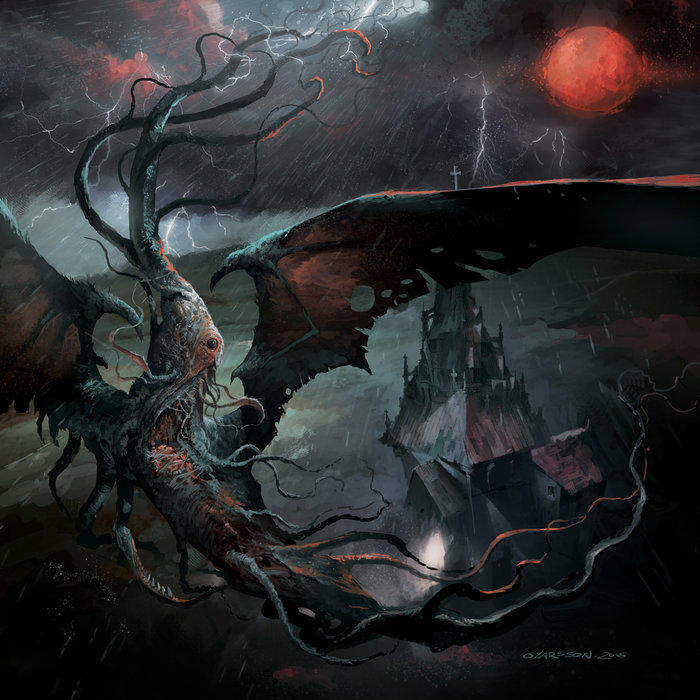 Lovecraft has undoubtedly left his mark on music, especially in metal or better yet..Death Metal. His dark stories are inspiring many artists since years. Sulphur Aeon from Germany are amongst them and are back after 3 years with their 3rd album “The Scythe of Cosmic Chaos”. After 2 strong albums the expectations are high amongst fans. Did they deliver? Yes they did, but maybe not for the pleasure of everyone`s ear.

The sound quality is great, having a modern production that doesn’t sound too sterile. The artwork doesn’t match the awesomeness of its predecessor, but still working well in the lovecraftian cosmos. About the music; even more versatile than the previous ones and something that immediately crawls into my ears are the clean vocals and chants used on this album that shows the huge spectrum of this band and what future endeavours may bring. The guttural vocals and the clean ones alternate between each other when needed, something that finds its epicness (or one of`em) on the second track which is a Nile reminding dark epic Death Metal song with a sick doomy edge. Not just because of the vocals but is mixed up with some appealing blasts and beat variations.

Sulphur Aeon are not your standard Death Metal. The range of influences became clearer on the newest output making it a very interesting album in terms of variation. Not just showing blast and brutality but also some more atmospheric parts and more variation on the percussive side, with a slight loss in terms of brutality (maybe also because of the melodic leads that may have a more hymn like character than other releases of`em).

Nile, Behemoth, Bölzer, Dread Sovereign and others come to mind while listening to this 50 minutes metal madness without copying the aforementioned bands. A good third output that expands their sound and maybe also their fanbase, not THE masterpiece they may have wanted (to me it lacks the really outstanding moment(s) to claim it as such), but an interesting continuation with some additional stuff in their Death Metal that probably is only the start to even greater things to come. (DPF)