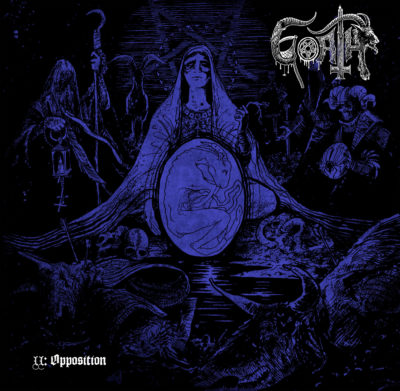 German Black Deathers Goath present their second coming entitled “II-Opposition” through Ván Records about 1 year after their successful debut “Luciferian Goath Ritual”. Goath continue where they left with the debut, which means they take influences from the golden ages of Black and Death metal and mix them up in a fantastic cocktail of versatile, powerful and dark hymns to worship the Goat(h) himself. Depending on the song it varies with the elements going from Scandinavian Black Metal (some with Dissection like melodies, others more on the chaotic brutal side), thrashy up-tempo moments in combination with American/Finnish death metal with excellent breaks and headbangfactor reaching high levels of catchiness while still remaining brutal. Some of the song have atmospheric like passages creating weird psychedelic moments which make the album on overall a little less accessible after the first listen but more interesting with every consecutive one. In the end an improvement on every department without losing the keyparts which made the first album so great. I just love the production as it is so powerful, warm, well balanced and not overproduced at all. The trio just went a step further to be among the GOAT (Greatest OF ALL Time). Before I forget, there is also a lot of Australian/northern American bestial madness in it for the fans of Black Witchery, Corpse Molestation and the likes. Great mixture, perfect production, evolution, dark and brutal in your face, variation…everything that defines a more than good album. Highlight once again. Cheers! (DPF)