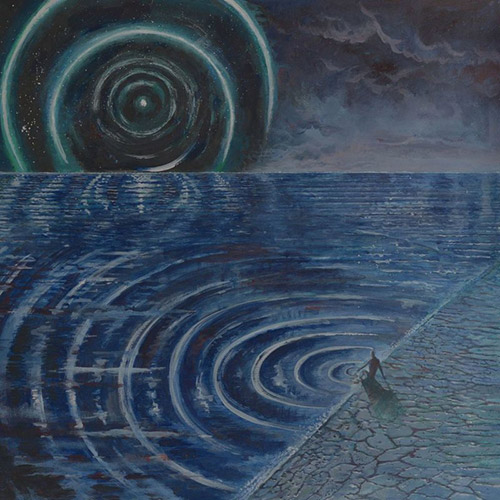 From the northern lands (Sweden) a new star is born. To some the name might seem familiar and giving it a closer look you are going to be right as well. Sweven is the new chapter from what once was a band named Morbus Chron, named after their last album “Sweven” to be precise.

The cover art by Raul Gonzalez suggests what could possibly happen on “The Ternal Resonance”, the debut of Sweven. The first track, an instrumental leads the way to a journey that drags the listener into different spaces, different places, to other dimensions and beyond. The warm, organic and powerful sound opens wide like oceans. And just like the infosheet suggests “expect the unexpected” so it will be for the entire record. Some Control Denied references can be found, but mostly it is what could have been expected by Morbus Chron after “Sweven”, or even more? The balance between progressive structures and straightforward rock action is incredible. a lot of work was put into every detail (song structures, each riff, line and hit). The vocals still have it’s fierce, inhuman raspy character but feels more melancholic, more vulnerable, sometimes near from falling apart. A lot of emotion was put into them and you can hear it.

If you wish that Tribulation would sounds less Gothic, more progressive again, If you liked Chapel of Disease last record but seek for even more dynamics and space, well here is the answer.

Tons of ideas woven to a flying carpet, driven by a dynamic rhythm section and an intricating melodic guitar work. Sometimes a piano makes its appearance to underline that Sweven have no boundaries and are on the way to explore the (musical)cosmos further.

Sweven is the promise kept by (a) musician(s) that tried to conquer new territories with each new release. It is a continuation but also a restart, a rebirth after a needed break and Robert Andersson did well to take his time, together with fellow musicians Jesper Nyrelius and Isak Koskinen Rosemarin.

Be aware that you will need to take enough time for the record to explore every corner of “The Eternal Resonance”. Once you pressed play let yourself go and sink deep into the wide space of the musical cosmos. (DPF)