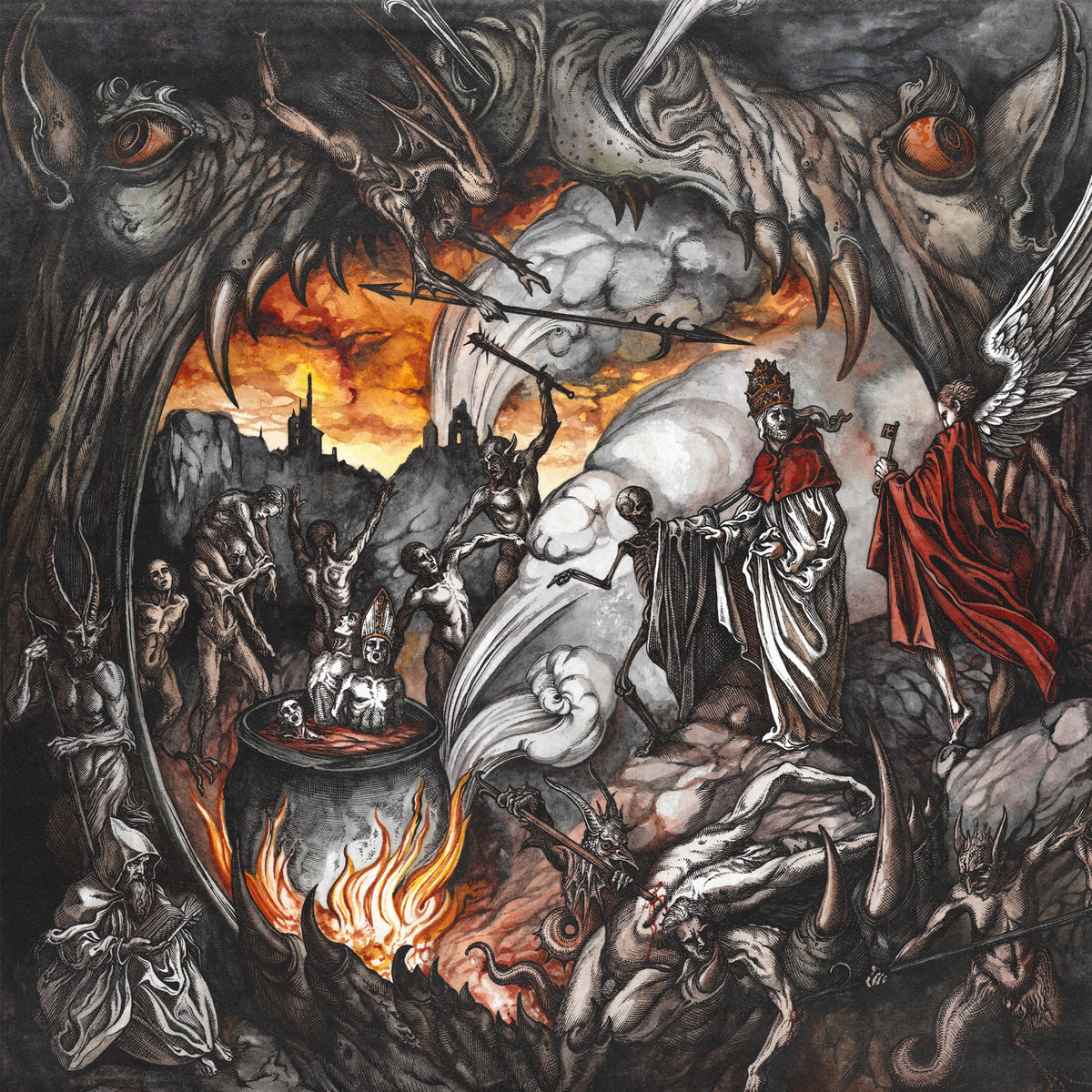 Whoredom rife, the Norwegian band consisting of K.R. (ex-Bloodthorn) on vocals and V. Einride (Syning, ex-Keep of Kalessin) playing all instruments, has been consistently pushing out quality releases since its inception in 2014. Telling of their productivity, the 2018 sophomore album ‘Nid – Hymner av Hat’ was followed by two 7” EP’s and a 10” split mLP before the release of 2021’s ‘Winds of Wrath’. Stylistically, the band’s sound had been firmly rooted in Norwegian Black Metal, but the ‘Vinternatt’ EP that directly followed the second album featured only acoustic tracks. This perhaps was a logical continuation of the acoustic parts on the track ‘Where Shadows Dwell’ on ‘Nid – Hymner av Hat’, and acoustic tracks are not exactly uncommon for Norwegian Black Metal bands either. Still, the EP turned out to be a (for now) one time affair, as both the Whoredom Rife material on the ‘Pakt’ split with Taake as well as the title track on the ‘Ride the Final Tide’ 7” EP showed the band in its familiar style. And Norwegian Black Metal is what we get on ‘Winds of Wrath’ as well.

While the sound of the previous album felt maybe a bit heavy on the bass tones, the 7” EP and 10” mLP had the band’s rawest production yet, fitting with slightly more raging tracks. On ‘Winds of Wrath’ Whoredom Rife has their best sound so far with a slightly sharper and clearer sound, most comparable to the debut album ‘Dommedagskvad’. This allows to bring out subtle background keyboards that so far had either been omitted, or simply went unnoticed. The result is a slightly darker, more haunting record. This is for instance clear in the for Whoredom Rife atypical mid pace closing track ‘Einride’, which results in an epic and melancholic end to the record. But said background keyboards are also obvious on the splendid opening track ‘Curse of the Moon’, a track that rages in typical Whoredom Rife fashion with catchy riffs that come back to haunt the listener during the dying seconds of the song, when spooky organs replay the sinister symphony. A similar effect is achieved in a different manner in ‘Gospel of Hate’: the track starts off in typical Whoredom Rife fashion but later transitions into a melodic solo with intense vocals. But let it be clear that ‘Winds of Wrath’ is first and foremost a typical Whoredom Rife record, packed with great Black Metal riffs, drumming and vocals, as is obvious from possibly one of their best tracks yet, ‘A Thousand Graves Endured’.

If you thought that after three albums Whoredom Rife had settled in and pretty much exhausted their style, think again. ‘Winds of Wrath’ shows the band is still improving their sound with every release, quite an impressive feat considering the high-quality body of work they have produced already thus far. (VincentP)