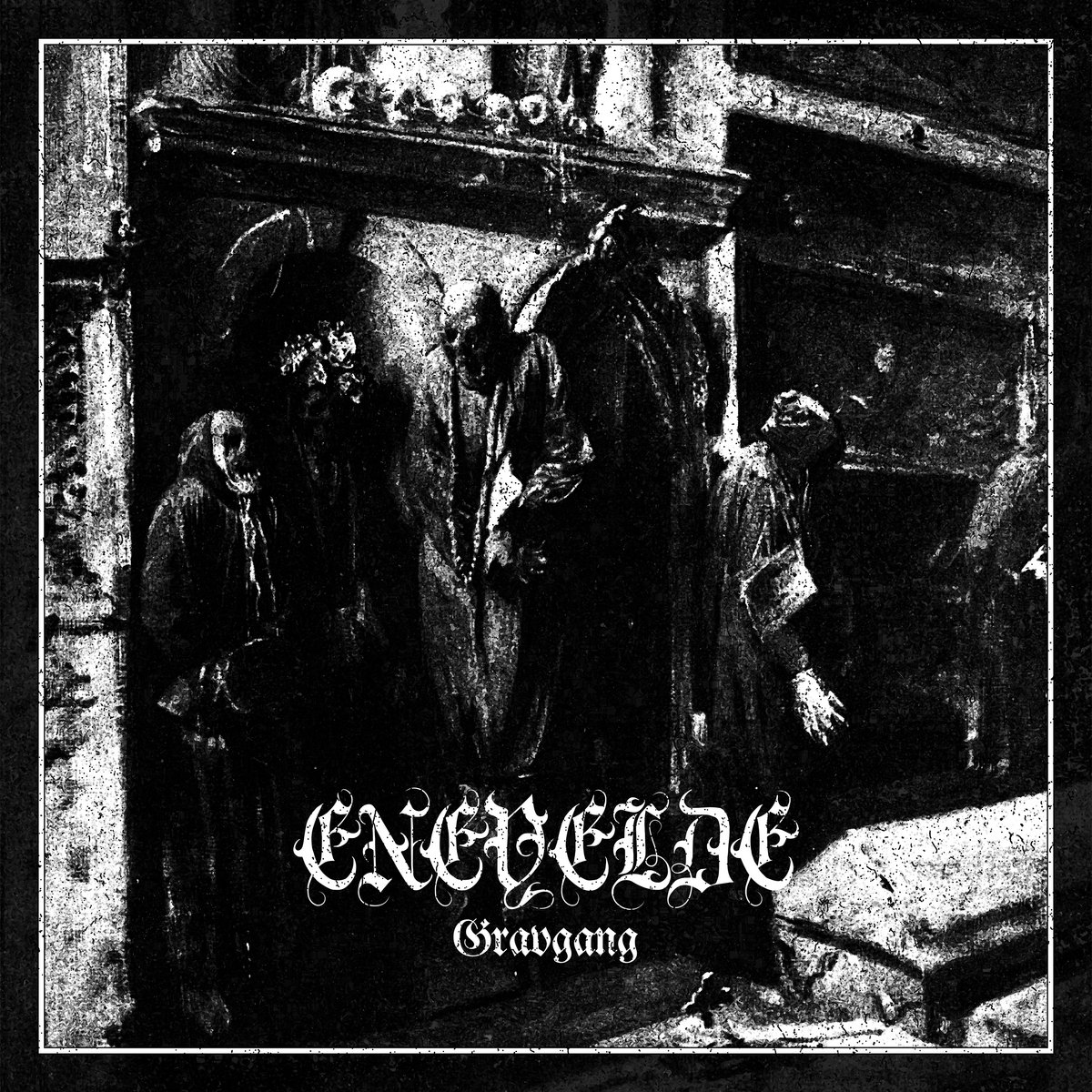 In the review of Enevelde’s debut record I already highlighted the bright current Nidrosian Black Metal scene that Trondheim has been enlightening the world with. But that Black Metal history is more deeply rooted in the area. As early as 1989, something was brewing in the city: Thorns, probably best known from their classic demos and late 90’s split with Emperor, set a fire alight in the city that would burn through the likes of Manes, Bloodthorn and Keep of Kalessin all the way to the current Black Metal scene. Thorns’ main man Snorre Ruch is often credited as one of the masterminds of the Norwegian Black Metal scene, yet the band’s long inactivity during the peak of the exploding scene likely left the band more out of the spotlights than they deserve. Still, some things are not forgotten, as we find on the `Gravgang’ EP, the second release by Trondheim’s Enevelde.

For the artwork of `Gravgang’ the painting entitled `Monreale’ from 1893 was used. This was created by the Czech painter Jakub Schikaneder, a painter famous for his portrayal of the poor, the outcasts, and scenes of death and the deceased. This scenery of a tomb is certainly fitting with the title of the EP that translates to something like `Burial Passage’. And the music fits perfectly with that imagery as well. My description of the debut record `Enevelde’ was a seriously sinister and unsettling piece of Black Metal, and the same holds true for the sophomore release. In fact, `Gravgang’ is an even bleaker and more ominous album than the debut. This is in part due to a grittier, shriller and more distorted guitar sound, a thicker bass sound and the sporadic addition of keyboards. This shifts the mood from the debut album to the EP from the unsettling to the downright unnerving. B. Kråbøl seemingly also stepped up his variety in drum patterns and delivers a haunting vocal performance that even exceeds his magnificent contributions to the previous Enevelde record as well as the Misotheist albums. In every regard he delivers an outstanding performance, since the EP that lengthwise could easily pass as an album was written, performed and recorded within the span of just one weekend.

One track in which the addition of atmospheric keyboards is obvious is `Enevelde’ (meaning `Absolutism’ or `Autocracy’), a menacing hypnotizing track that is a clear extension of the sound of the debut record but has the melody slightly more obscured in the distorted guitar sound. On the song `Gravgang’ the more creative drum sound is clear in a track that seemingly drags the listener down in a captivating ominous experience. `En Skal Ikke Tro’ (`One Should not Believe’) boasts an overwhelming start, an overall more chord based faster track with haunting melodies and a prominent role for the bass. Slightly different from the often-contrasting guitar parts, the riffs border on the harmonic in `Den Dypsindige’ (`The Profound’), a minimalistic and more melancholic work of darkness. The EP is rounded off with a tribute to Thorns in the form of a medley of the two tracks off the `Trøndertum’ demo, `Ærie Descent’ and `Funeral Marches to the Grave’. Although the Enevelde material is much more minimalistic, in particular the overlap in sound and atmosphere between the Thorns tracks and the Enevelde interpretation are striking. You would almost believe it was an Enevelde original.

While the excellent debut album already showed extreme promise for the future of Enevelde, this new EP manages to further heighten the expectations. `Gravgang’ turns out to be an excellent continuation of the path set on with the debut, an ominous and unnerving piece of Black Metal to quench our thirst until the coming of the second Enevelde full-length album. (VincentP)