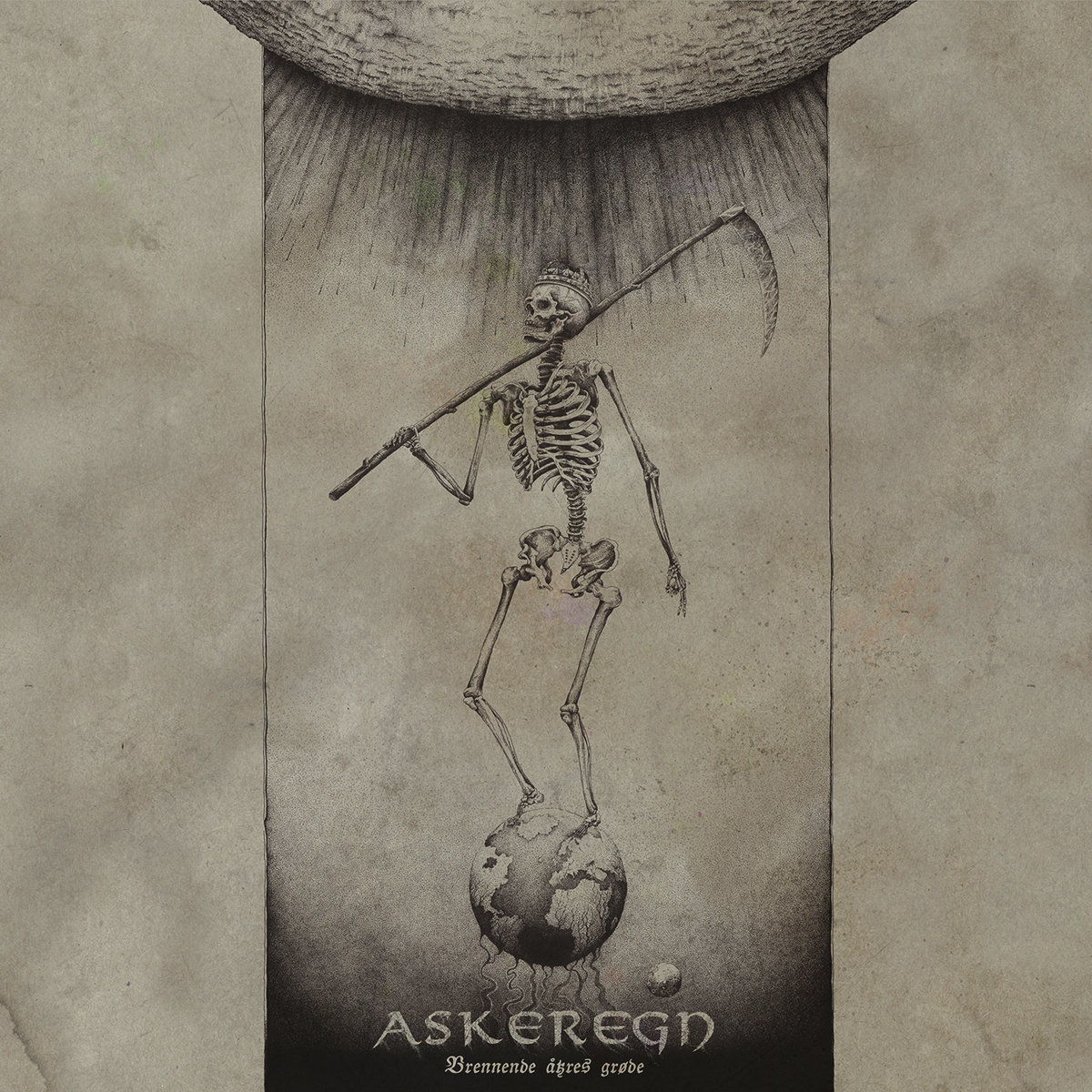 Some years ago, it felt like a true achievement to obtain Terratur Possessions releases. Not because they were limited in quantities or because they lacked distribution. Simply because the demand was insanely high. And for good reasons, each of these releases were stellar in every possible way. And while each release should be judged on its own merits, the overall quality of Terratur Possessions releases has always been extraordinary and pretty much without flaws. Considering the awareness of many of the quality records published by the label, it is baffling that some releases appear to go largely unnoticed. Such is the case for Askeregn. Hailing from Østre Toten, a municipality in the vicinity of Oslo, the band released a demo in 2011 and a split EP with Vordr in 2012 before the release of their debut album. ‘Monumenter’ was released by Terratur Possessions in 2015 and is an incredible record full of Norwegian Black Metal in all its unsettling beauty. Surprisingly, the album was still available years after its release, apparently dodging the radar of Black Metal fans worldwide. And a similar thing might be occurring with the release of 2022’s ‘Brennende Åkres Gr​ø​de’ (CD and vinyl coming early 2023). Take this foreword as a heed of warning: skipping this will be a mistake.

Askeregn consists of the trio of musicians of H. Robak on bass, F. Granum on guitars and E. Rustad on guitars, vocals and drums. One of these members is also known under the pseudonym of Levningr, the mastermind behind the phenomenal band Knokkelklang. My guess goes to E. Rustad, and that’s not just because F. Granum is in the credits of the latest Knokkelklang album. It’s even more so based on the strong overlap in the downright intense and howling vocals that grace both ‘Brennende Åkres Gr​ø​de’ and the, in my opinion almost equally overlooked, Knokkelklang masterpiece ‘Jeg Begraver’. Otherwise, the overlap in music can mostly be found in the atmosphere of the music, although Knokkelklang strikes a much darker note. Musically, on ‘Brennende Åkres Gr​ø​de’ (which loosely translates to ‘Burning Fields’ Crop’) Askeregn continues on the path set on ‘Monumenter’ and the subsequent split with Kêres. The base is old school Norwegian Black Metal, but the band offers so much more.

Album opener ‘Under Dødens Måne, under Djevelens Sol’ displays how subtle changes throughout the song, either in changes of riffs or drum patterns, add layers of intensity and variation while keeping the essence of the song in sight. ‘Ekko av Omhet’ features a multitude of atonal riffs that crawl under your skin yet maintains a typical old school groove. These atonal riffs shine even further in the downright amazing ‘I Røyken fra Brennende Åkre’, a song in which E. Rustad brings intense vocals while organs add to the unnerving atmosphere. ‘Hildring’ sounds superficially straightforward, but upon multiple listens it becomes obvious how dynamic the song actually is and showcases the excellent thick bass sound of the album. The ferocious start to ‘Inn Mot Natten’ with insane vocal howls that lasts tens of seconds makes it one of the highlights, in which punishing Black Metal riffs and a possessed vocal performance drive the song faster and faster into the abyss. In ‘Mitt Hjerte er en Navnløs Grav’ the band opts for a more repetitive and hypnotizing approach, with maniacal vocals calling forth a delirium until a thick slow apotheosis drags the listener down to the deepest pits. The monumental closing track ‘Når Ilden har Sluknet’ clocks in over eleven minutes, a song filled with trance-inducing atonal splendour, meandering bass riffs, haunting organs and thundering drums that sounds as the ritual that will invoke the approaching apocalypse.

‘Brennende Åkres Gr​ø​de’ is a downright sensational album. As accurate as the description of Norwegian Black Metal is, it understates the creativity, dynamics, groove and unsettling atmosphere found on the album. Amongst an impressive collected catalogue of Terratur Possesions releases this stands proudly and firmly towards the very top. Do yourself a favor and do not sleep on the new Askeregn album.