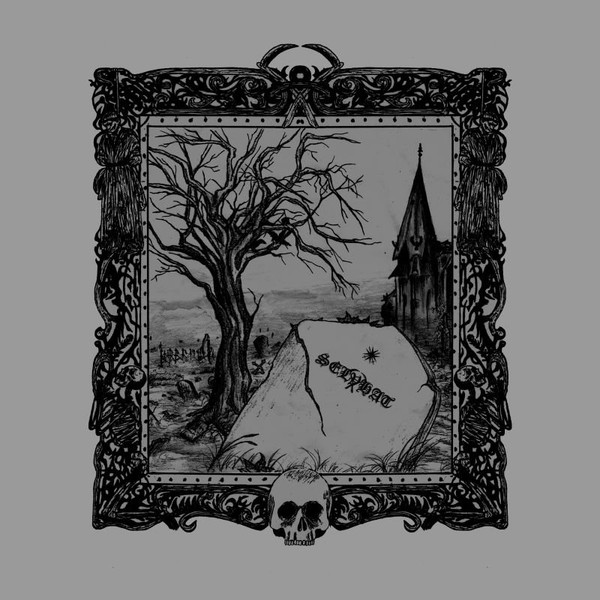 Before releasing his sole album, ‘Gjennom Mørket Famlende’ in 2008 and the ‘Einsam In Ewigkeit’ 7” EP from 2007, Steingrim Torson recorded a bunch of demos and rehearsal tapes, of which only a hand full made it to an official release, with his solo-project of Selvhat. He was one of the key figures in the Trondheim (Norway) Black Metal scene, where he was part of bands such as Celestial Bloodshed, One Tail, One Head, Kaosritual and Jammerskrik until he tragically lost his life on the night of April 30th 2009. In memory and fond remembrance of Steingrim, long-time companion Terratur Possessions has been reissuing the majority of Steingrim’s extensive back catalogue. Many of his recorded material has made available again for those who missed the opportunity to pick it up when it was released in the late 00’s.

Coinciding with the release of the single album (reviewed by VincentP), this compilation album is also released which bears the most fitting yet confrontational title, ‘Avskjed’ (‘Goodbye’). It is not a compilation album in the most traditional sense, as in getting all the old recordings together and pressing them in (a)chronological order on vinyl. This is a double vinyl album that has songs that have been handpicked from various older recordings and should reflect those earlier stages of Steingrim’s personal vessel.

That Selvhat was a deeply personal musical vehicle was already very obvious with the release of the ‘Einsam In Ewigkeit’ 7” EP, which came with a small xeroxed piece of paper that was basically a list of all medication that he used. While none of these two tracks of that EP eventually appears on this compilation, the product has the same feel to it. Its inlay has a piece of text that came from Steingrim’s private notes and once again underlines the mental trouble Steingrim had faced during the second half of his life. The same goes for the photo of Steingrim, with his bare upper body lying in the snow, on which you can clearly see the traces of blood and half-healed scars from cuts.

The music on offer fits very well to his mental state. Deeply emotional and steeped in pain and sorrow, Steingrim plods through an eleven-song set that differs somewhat in recording quality but whose jet-black core binds them together. The music’s slow and dragging pace pierces right through your soul and the pain that Steingrim was in while writing those tracks is palpable. That depressive ambience is evoked through the seemingly endless repetition of those riffs and melodies. Especially with the ‘Befrielsens Pine’ track that cover the whole B-side, is a perfect example of the genius of Steingrim, who seemingly needed very little to achieve a pure and oppressive atmosphere. It is very much based on those bleak and one-dimensional Burzum and Forgotten Woods like song structures, but Steingrim was able to put all of his soul and personal wretchedness into those melodies and dismal riffs.

On a personal level Steingrim’s death was something that came rather close, which made listening to these tracks not all that easy. The emotional feelings that were channelled through these songs were enough to pierce through any mental armoury I had, but then again, there are some unreleased tracks on this compilation as well as tracks that had been spread in such limited quantities that I never heard them before. I used to only have the Gjennom Mørket Famlende’ and ‘Einsam In Ewigkeit’ 7” EP and I am very grateful to Terratur Possessions that they presented this tracks that so closely represents the way Steingrim used to like his music and art being released. ‘Avskjed’ is a treasured and respectful monument to one of Black Metal’s most talented musicians.