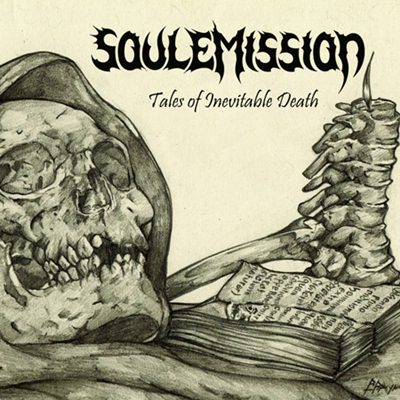 Soulemission from The Netherlands is a fairly new band, but the men behind the moniker are not. They were involved with bands like Cirith Gorgor, Prostitute Disfigurement Visveral Bleeding and Shining (Norway) among others. And the connection with Shining goes even further, as Niklas Kvarforth has entered the studio to do some guest vocals. The musical content of “Tales of Inevitable Death” is inevitable as well; Black/Death Metal. Where vocalist Michel is 100% Black Metal, the riffs are mostly Black Metal, sometimes a bit melodic, with a tinge of Melodic Death Metal (but this is really occasional). This album also has some good leads as well, as demonstrated on “Where Fallen Angels Dare”. It is an interesting blend of Watain, Valkyrja, Emperor’s “IX Equilibrium” and late 1990s pre-“Panzer Division Marduk”…Marduk (not an ending to say 10 times in a row after drinking a beer or 7). A decent debut and already curious how Soulemission will sound on their second album. (Ricardo)