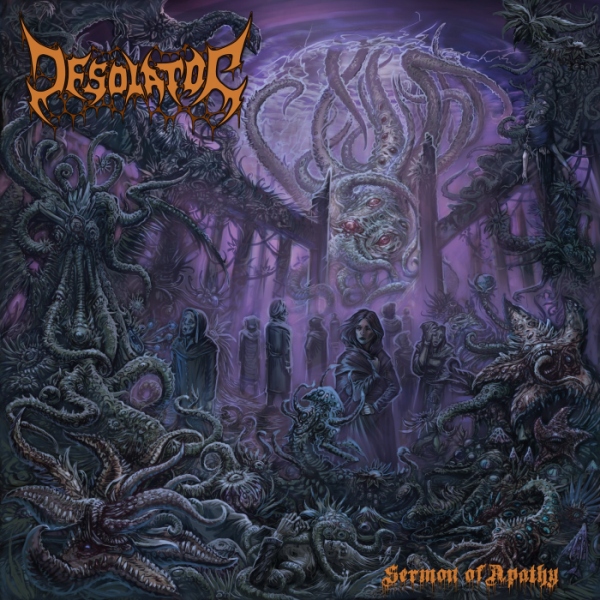 How to grab my attention: Interesting cover art, cool band name, interesting guests on the record! Yeah! Desolator from Sweden did that. With a nice cover by Alex Tartsus they already got me to give it a listen. Seeing Karl Sanders from Nile being mentioned as guest just makes me even more curious, and being named as Desolator you just have to expect some killer Death Metal right? Here we go.

After their first full in 2013 “Unearthly Monument” it took 7 years to release a follow up. Sure, they weren’t lazy. 2016 the EP “Spawn of Misanthropy” saw the light of day, so there was already some cool stuff around. Finally in 2020 a new record called “Sermon of Apathy” will be out and Black Lion Records takes care of the release and I must tell you that this one is a great beast of Death Metal!

The production is modern but not sterile. The songs are great and I tell you why. Unique blend. Tons of groove reminiscent of Bolt Thrower and Immolation. Dark vibes in the veins of Immolation. Great sense for variation in speed, riffing and leads. Good sense for dark, melodic leads. Killer vocals, killer catchy songs and hooks. This is Death Metal! “Methods of Self-Deception” is THE perfect example for this. You can bang your head constantly to it! Some faster stuff like “ The Human Condition ” has got some Morbid Angel, Hate Eternal vibes and some unique use of clean guitars while some mechanical bass drum pattern and muted tremolo picking, Decapitated style marches on. The entire record has a very Lovecraftian atmosphere, tons of groove and killer RIFFS!!! “ ”Vaticide” has a lot of it, Morbid Angel omnipresent but still not just copycats. Nice spotted bass lines, accentuated drumming and well placed vcalspatterns.

“The Great Law Of The Dead”, the finisher If you want, and a monolithic beast, featuring Karl Sanders doing a guest solo and Oliver Palmquist (Phidion) doing vocals. A crawling, stomping chaos, heavy weight Death Metal, with a strong Nile moment with those chanting vocals in there. IA! Afterwards a huge momentum will be build up before speed and groove alternate and you only can bang your head and sing along to the chorus “The Great Law Of The Dead”!! Not enough? Well then Karl Sanders will give you his skills in your face to give it even more epicness! Fuck yeah!

How to grabe my attention? By releasing a strong record that sounds fresh while still got the old vibes. Well done! Strongly recommended! (DPF)