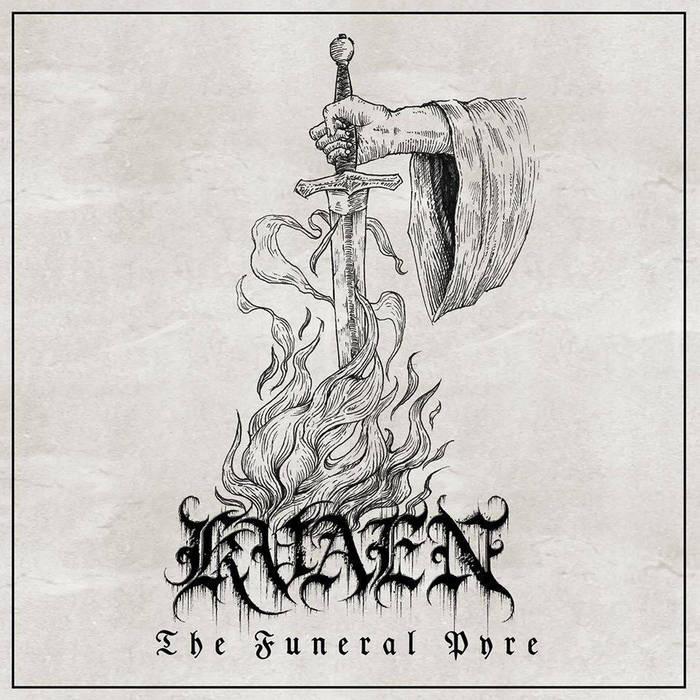 Kvaen is based in Kalix, Sweden, which is an ancient word for “cold”. This Scandinavian coldness resonates in Kvaen’s complex compositions. No demos, splits or 7 inches that preceded this record or could prepare us for this impressive Black Metal eruption. Jakob Björnfot solely composed his debut and recruited session musicians who did a more than decent job.

“Revenge by Fire” kicks in your front door with a memorable opening riff, it sticks to your rib cage like a rusty bayonet, melodious but with a vicious vitriol injection. “The Wolves Throne”, another impressive song, is introduced by howling wolves in a downpour, the wolves are joined by Jacob’s leads to blend seamlessly into an varied, epic Black Metal whirlwind. Jakob shows his masterful skills as a songwriter, showing grand melodic musical intermediates and transitions interrupted by furious Black Metal blaststorms.

Do not expect an under-produced, rattling basement Black Metal sound on this album, “The Funeral Pyre” rages and blows through your auricles with a clear and balanced sound. Especially the drumming sounds very detailed and varied. Obviously a lot of time and work has been put into this. Every song on this versatile album deserves a mention, the furious “Bestial winter”, the epic and melodic “Hymns to Kvenland” are two masterpieces that should not be left unmentioned.

“The Funeral Pyre” has all the elements to become a classic in this already overcrowded genre. Although the album is pretty complex, the songs are quit recognizable due to the insertion of the right amount of melody.

Do yourself a favour and discover this Nordic blizzard, but watch yourself for frostbite. (Franki_boj)