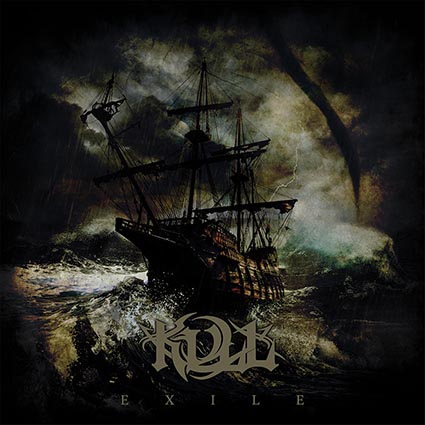 It has been 13 years since the last Bal-Sagoth record. No band ever combined the elements of Black Metal and symphonic Power Metal so perfectly like Bal-Sagoth. Kull directly continue their path with “Exile” as it is a grandiose, overblown and bombastic record. All the elements which made Bal-Sagoth so unique are present, with the difference that Kull is a little bit darker with a more devilish touch.

In 2013 all members, minus the vocalist Byron reunited under the name Kull and they received support from Tarkan Alp. After a few demo recordings which were perfect for Alp to mature, Black Lion Records stepped in and now we have “Exile”.

The Maulding brothers do what they do best, writing epic and symphonic heavy music. There is nothing more to say about the music as if you love Bal-Sagoth you will definitely love Kull but it would not be fair to compare the vocal performances because Bal-Sagoth had Byron and Kull has Tarkan. The vocals on “Exile” are very venomous, even the narration parts which gives the songs a special dark tone.

The only thing that could be a little bit better is the production in general. When every song sounds like the intro track, this whole album would have reached a different level of power, but that’s life. Nevertheless “Exile” makes a lot of fun to listen to.

For me the important question was, if Kull is Kull or Kull-Sagoth? After listening a few times to this album I can definitely say Kull is Kull. That’s the way it should be. (HaCeBo)