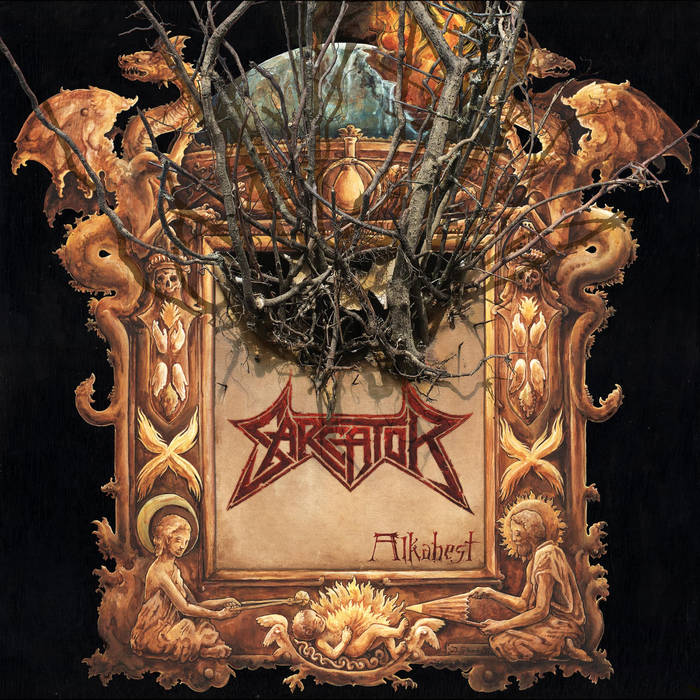 Usually I am not quite interested in father-son kind of relations, or any other family relations, between musicians. I think that every individual needs to be judged upon their own personal achievements, and if you look at sports, movies or other art styles you can easily name various examples of sons who either outshine their fathers or do not even come close. But, in the case of the Swedish Thrash Metal band Sarcator, it makes sense to mention that founding guitarist of Sarcator is Mateo Torvonen, whose father is Marko Torvonen, long-time guitarist in Swedish deadly Thrashing trailblazers The Crown. As our chief-editor mentioned in his review for the bands’ debut album, Mateo must’ve heard The Crown more than just once in his life. And that shines through in the music of this young band.

Sarcator roughly finds themselves in the same vein as The Crown, but have a much less deadly background. Instead it sounds a little more melodic and seem to lean more towards classic Heavy Metal. But at the same time it also has a slight Black Metal touch in some of the riffs, yet they also do not shun some progressiveness in the calmer passages. Which, for that matter, makes Sarcator a band on its own that do no need much of a comparison with The Crown. Because of the slight mellower approach to the genre, they sound much less aggressive and they seem to invest more on the song writing. This is something they do not do equally well on all songs. Sometimes there seem to be a bit too many musical ideas crammed into a song, making the whole thing lose some of its listenability; perhaps a result of youthful spontaneity. A good example of this is ‘Dreameater’ or ‘The Long Lost’, which actually goes in all directions, from calm plucked passages to some more intense pieces, but doesn’t actually come off very well.

This broadening of musical horizons and experimentation is also the main difference from the bands’ 2020’s self-titled debut album. That was a lot more straightforward Thrash Metal, which featured more than a few friendly nods to the genre’s big names – who doesn’t wig out on a nice serving of Sodom-like Thrash Metal? For those who like that kind of Thrash Metal, that first album was a fun and fresh experience. Yet, like many bands that started out as Thrash Metal bands, Sarcator also started experimenting with other styles and musical influences. And as we know, not all bands have gotten much better from that. So it remains to be seen what Sarcator will do in the future, it is quite possible that ‘Alkahest’ could turn out to be a transitional album in the bands’ discography.

Still, after listening to this second album by the young Swedes, I am left with a positive feeling. There is enough musical talent in the band to come up with good and interesting music in the future. I am especially curious to see what happens when the band shows a bit more colour and will choose to take some clearer paths – which, by the way, does not have to mean stopping their experiments.