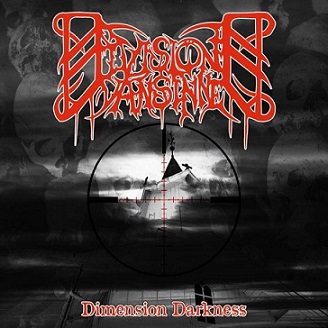 Although being formed in 2008, and after some line-up changes, Division Vansinne from Sweden released their first ever recording with this demonic piece of extreme metal. General TortureXvidian has summoned the evil spirit to play in the old vein of 1990s Black/Death. Did he accomplish? I have to say; partly. Division Vansinne does play in the old vein of 1990s Black/Death, but manage to grab almost everything of both 1990s Black Metal and 1990s US Death Metal. You hear all kind of references, be it old school blasting brutal Death Metal as well as fast or melodic Nordic Black Metal riffs. You can hear Panzerchrist and Deicide and some old school Dark Funeral fast riffs in one track for example. Division Vansinne is able to create such tracks, but play to many different styles in a track. Be aware you won’t hear any Unanimated, Sacramentum, Dawn or Dissection full blown Blackened Death Metal tracks on this album. Sometimes you can hear bits of some melodic Scandinavian influences, like on “Ritual”, but it’s never from the beginning ‘till the end. Another example? Listen to “Flyende under solens pest” if you will. One of the few, if not the only one, which starts as mid-tempo Black Metal, but after 3 and half minutes, you get a typical Cannibal Corpse passage followed by a melodic part. My advise, pick a lane…play this, or this, or this or that. Now the good ideas, and they are certainly present, just drown in a pool which is filled of…well…“everything”. As I think these guys are able to create kick ass album according to the musical ideas I hear, I hope they will settle down for one style for their second album. (Ricardo)