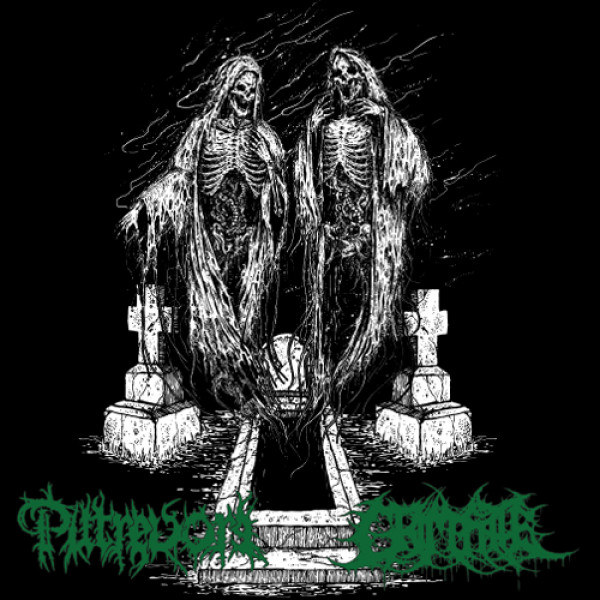 Behold, the glories of our world!  Exquisitely beautiful azure skies; The most joyous blue the human eye may bear witness to.  The warmth and glory of the Sun caressing one’s skin. The unmitigated awe imposed through witnessing the supreme power of the great rivers and oceans.  Ageless and imperious mountains filling one’s soul with wonder and reverence. The comfort and pleasure of lying in the softest and greenest grass; Soothed by the gentle breeze and held in the maternalistic embrace of shade from majestic, ancient trees. The feeling of the soft, warm and naked skin of your beloved against one’s own.  The laughter and joy of one’s children.

Now…face the diametrically opposed.  Wake up!…dig out!…crawl! Crawl through worm infested sludge.  Crawl through to the surface. With fetid, decomposed posthumous form witness the stark and grim juxtaposition of life.  No one wants to look. But, oh…you will…you must…all mortal coils are unwound in the end. The icy darkness is suffocating.  Barren Earth. Rotting, cold flesh. Hate. Despair. Anguish. The realm of death and putrefaction!

The mere image of the cover of the Putrevore and Grim Fate split exudes the aura of grotesque postmortem reverie.  Two decayed, shambling spectres surfacing from the chasm beyond, harbingers of doom, as if analogous to the music within.  The two forms coalesce, joining to bring tremendous catastrophe in mere minutes.

The product of a marriage between Spain and Sweden, Putrevore gracefully and elegantly escort the listener to the opening salvo with the subtlety of a Grizzly bear attack.  Immediate rapid fire blasting and relentless axe grinding with hyper-fast chromatic triplets transition to droning and eerily melodic tones. Like “Titan Towers Submerged” rising from the immeasurable abyss of the deepest ocean, the power is utterly cataclysmic.  Sounds reminiscent of old Rottrevore, Grave, Avulsed, Purtenance and Baphomet crash into the listener like megatons of displaced water. Pinch harmonics are interspersed throughout the riffs with an Immolation-like tenacity. And while I am not generally a fan of repeated use of pinch harmonics to end riff segments, I did not hate their usage here.

The highlight of this song, other than the Undergang style vocals, is likely the half-speed section prior to the outro lick. The drumming sits towards the slower end of mid-paced with overlying tremolo guitar and is utterly devastating.  The ravenous songwriting combined with vocals sounding as if they were recorded inside a septic tank make “Titan Towers Submerged” absolutely savage.

Alas, the Netherlands’ Grim Fate stole my heart on this split.  Pairing with a band of such reputation as Putrevore on a split is daunting.  But, their presence here is quite fitting. Dawnbreed Records and Seed of Doom really hit the mark with this 7” split.

The slogging, constricting, and oppressive nature of their track “Untimely Demise” makes it seem as though it actually has a physical weight to it.  The stench of the lyrical content seeps through your lungs to choke you and the substantial tonnage of the audible content crushes you like a thousand pounds of Earth burdening your chest.

“Untimely Demise” opens with low, mournful, ringing notes and chords which exude grim intent while cymbals crash audibly in the distance from what seems to be the place beyond death.  The aural equivalent of rotting fumes and decay then emerge from the funerary vault with a gutteral vomitous growl accompanied by an absurdly weighty and trudging riff as well as distant reverberant toms to match the abyssal cymbals.

The song courses through a strongly Finnish influenced landscape with invocations of Rippikoulu for doomy weight and Abhorrence for filth.  Corpulent, big-payoff riffs would be repeated, and there was a continuing sense of forward movement throughout the song. All this without feeling as if the 6 plus minutes was dragging on repetitively or getting boring.

I could have done without any of the sections in the solo faster than a ¼ note as they felt a bit odd and unnecessary.  It seemed to evoke Spectral Voice but did not quite hit the mark. However, the song as a whole was very good and the production really added to the dismal, extracorporeal vibe that I believe was intended.  An expression of post mortem finality. Swarming with Vermin. Left to Decay. (Chris Topher MC)