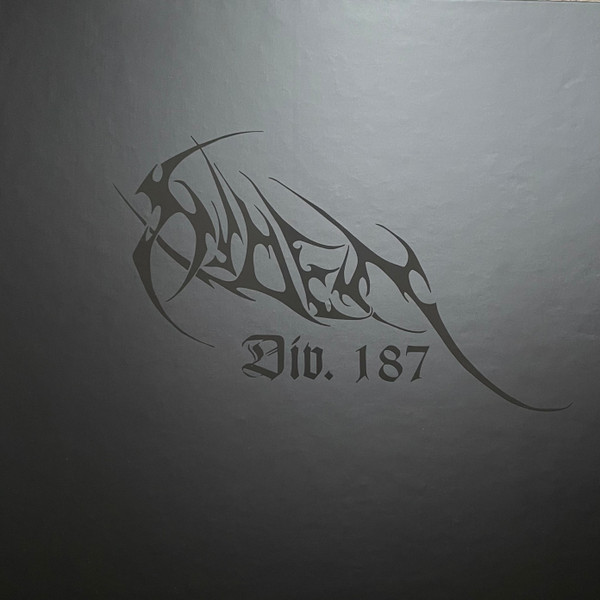 While both the Black and Death Metal genres were producing one groundbreaking record after another in the early nineties, the scenes exploded in volumes in the second half of the nineties. This wasn’t just bands with members new to the scene, but often enough side-projects of members that wanted to try their hands on something different. Such was Niden Div. 187, a Black Metal project created by and including Henke Forss, Jonas Albrektsson (both of amongst others Dawn and Retaliation fame), Jocke Pettersson (also of Retaliation and at the time Thy Primordial) and Leo Pignon (A Canorous Quintet). This resulted in the 1996 EP `Towards Judgement’ and 1997 full-lenth album `Impergium’, before the band disbanded. Both recordings were re-released several times since, including this 2021 edition on vinyl by Dawnbreed Records and De:Nihil Records.

Both releases are re-issued together in a luxurious box with an insert containing some background information about the band. The vinyls (available in black and red / black galaxy vinyl) come in separate jackets, with LP1 consisting of the `Impergium’ album and LP2 containing both versions of `Towards Judgement’ (side 1 contains the demo mix, side 2 the MCD mix). The difference between the two EP mixes isn’t that big, and mostly lies in the drum sound. While I prefer the mix of the MCD, both sides sound great. By today’s standard, the sound of `Towards Judgment’ is quite raw, producing an in-your-face wall of sound. The drums rattle ferociously while the sawing minimal guitar riffs rage on. Some songs like ` A View in the Mirror Black’ have some subcutaneous melodies, but it’s quite far away from the sound of for instance Dawn. However, some parallels with the primordial Swedish scene are clearly there, although they remind me more of a Western neighbor.

On both releases and especially on `Impergium’ the sound of Immortal shines through, though in a stripped-down version. I’m reminded of `Pure Holocaust’ (also because the production sounds essentially like a more distorted verion of that album) mixed with some of the blazing riffs from `Battles in the North’. Or perhaps a more recent reference would be Hate Forest with high-pitched Black Metal screams, although the Ukranian band released their sound-defining debut `The Most Ancient Ones’ years after Niden Div. 187 had folded. Niden Div. 187 focusses on pure unrelenting violence, with songs that rarely go over three minutes and rage onwards for the majority of the time. The music is at times focussed on a minimal amount of riffs, but other times chaotic with wild and blazing drums. `Judgement Dawns’ and ` A View In The Mirror Black’ are two album highlights, as is the ultra-short `The Execution’ that starts slowly and explodes into a short-lived fury.

I used to own a CD version of this material years ago, but I never really appreciated it until the most current re-release. Now, it made me realize that Niden Div. 187 had a ferocious pair of Black Metal releases on their hands with `Impergium / Towards Judgement’, which fortunately for the admirers of the genre are now again available on the black (or red) gold. (VincentP)