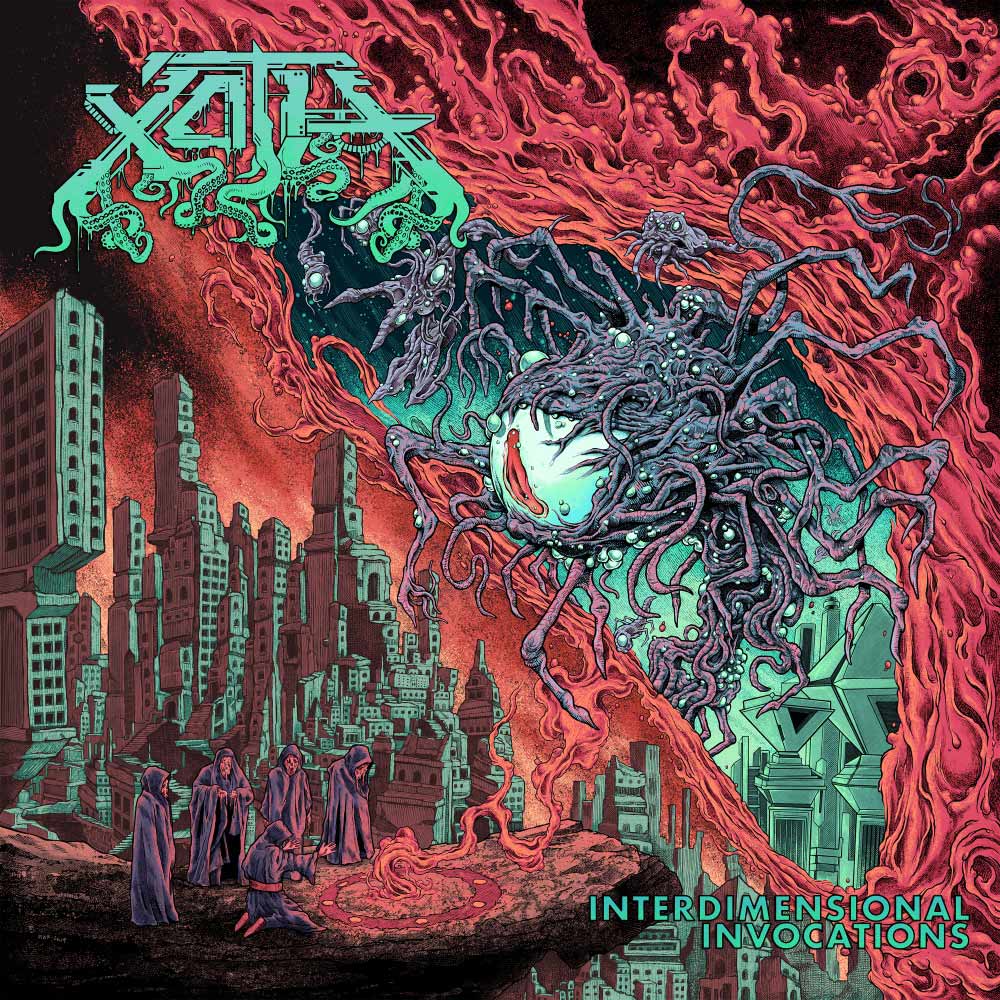 In the Pacific Northwest Xoth, is a band that has earned a bit of a name for themselves.  This project is a mix of technical Death and Thrash with splashes of Black and a tiny hint of Power Metal.  What helps the band stick out from the rest of the pack is that not only do they have the theme of tentacled space horrors, along with the obvious impression upon the first listen of not being afraid to explore.  Honestly, when one is to break the band down into those words, they are not unlike the almost forgotten band Bal Sagoth.  Now, they really do not sound much alike considering this band boasts no keyboards or synths whatsoever.  However, they do share the same love for exploring space with their intricate guitar work, synths, and lyrics.  Again, they share no riffs whatsoever, but the same love for fantasy and science fiction in general with their subject matter, with Xoth focusing much more on the aspect regarding horrors of space.

With the above being said, they really do not sound like Bal Sagoth , but seem to remind listeners that the old Symphonic Science Fiction/Fantasy band existed.  Xoth are most certainly a band that does place their own spin on their music.  Their riffs seem unique to them as neither of their two full length albums and their EP seem derivative of any genre.  Thus, while this is not the greatest band ever, this is a project that assuredly stands out from the pack.  Their riffs come across as genuinely their own, even though they seem inspired from the four main food groups of metal (Black, Thrash, Death, and Power/Traditional).

As for this album specifically, there are some definitive stand out tracks.  The first song, “Casting the Sigil” is not the best track or even the most memorable on this album, but is an excellent tone setter for this release.  To attain a fine grasp of what this record is about, I highly recommend “Unseen Abductor,” as it gave me the feeling of spiraling through the frantic horrors of space itself.  Another standout track is “Plague Revival 20XX,” a redone version of their single released a year prior to this album.  The ending track of this record, titled “Melted Face of the Soul,” was a fitting way for this album to end, as there were some rather memorable repeating melodies that still continue to echo through my skull.

I do not find this album better or worse than the first album.  To me, they both had the same overall sound quality as well as the nearly identical style of outrageous riffs, just different, of course.  The most notable aspect about this album is that at just under 40 minutes of music, the album does not linger.  Every song starts out begins quickly without any introduction and the entire album just plows through from riff to riff throughout.  Some will say that because of how quickly the album moves, the listener cannot feel the impact of the songs as there is a somewhat lack of repeating riffs at times, but there is a valid argument made for not wasting any time.  Generally, quick songs like these annoy me, especially with a space theme, but every track progresses smoothly.  At least there are no shortages of tempo changes and melodies.  The songs do not hold your hand, they push the listener through a dimensional vortex of unique riffs I have heard from no other band.  Neither the band’s debut album, nor this one are masterpieces, as they move so quickly, but where this project vastly succeeds is the originality reinforcing the fact that these are indeed very good albums.  I sincerely doubt many bands, (if any at all) will imitate any of these riffs, or would even desire to do so.  This band is definitely it’s own creation and is highly recommended for those wanting to move past typical Black, Death, Thrash, or Power Metal.  This album definitely succeeds at being exceptional for repeat listening as the listener will most likely hear different melodies every time.  (Old Man Stares)