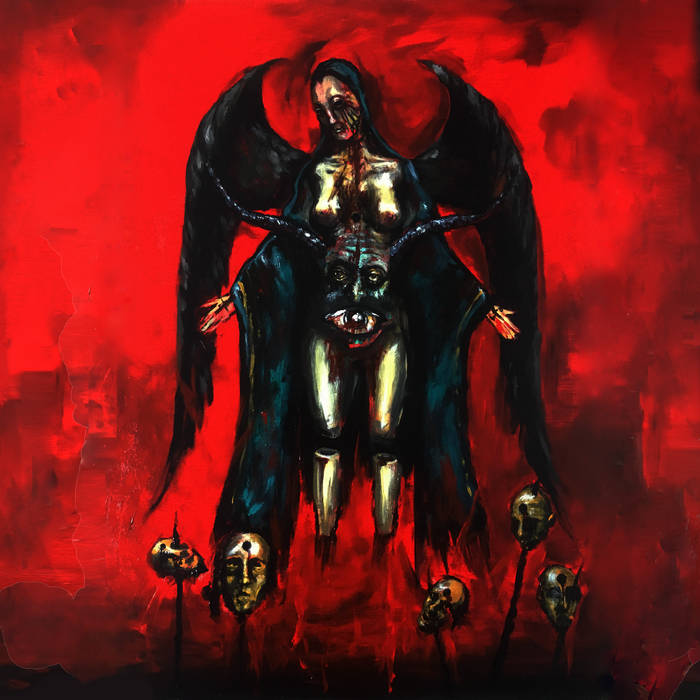 Strange call … upon the final gathering …

Third album of these rotten satanic underground terrorists from Poland. The third album fires at all cylinders. It displays an enormous heavy and spatial sound. The vocals are less prominent in the mix, but still very audible, to the smallest details. Suffering, pain, lunacy, depression, torment. A textbook example on how vocals can be turned into an instrument.  The previous two Xarzebaal albums were impressive, to put it mildly, the third chapter does take the cake.

Guitars have become way more diverse than on the debut album, big layers of different guitar chords are molten into a horrifying cavernous sound. Bass guitars seem to have found their place. Keyboards are stlll being used to create a foundation on which all the rest goes rampant. Once more: the result is a dense, scorching inferno of satanic black art, 9 untitled tracks long. There are no dead moments on this third album. Room was made for eerie interludes in the songs, creepy sounds are strategically placed. The required studio effects – it fits like a clockwork orange. Pure genius. Evil genius.

Les Légions Noires influences? Maybe. One might as well add Vetala and  Lycanthropic Winter Moon or even Folteraar or Sanguine Relic to the list. At the end of all these name citations, there remains a putrid and impeccable produced album. Not one flaw nor hint of a trendy polished sound can be detected. Raw underground metal at its apex.

Xarzebaal really has outdone itself with “III” this time. All three manifests are items to be cherished and treasured. Third hammer strike for Putrid Cult Records. Three big nails through the coffin! You like your Black Metal twisted, sick and nerve wrecking? You spit on conventional Black Metal? Your adolescence is/was a pile of crap?

Google the label name and get yourself some piece of the action. (LV)